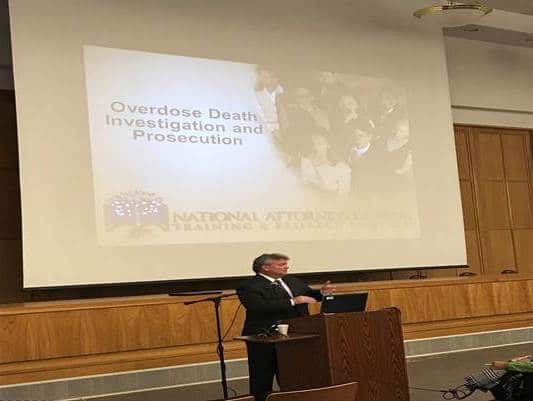 As the opioid crisis continues in Mississippi and across the country, Attorney General Jim Hood hosted an opioid overdose death training session to assist first responders in their efforts to combat the epidemic.

From 2013-2016 in Mississippi, there were 563 reported drug overdose deaths, and 481 of there were related to opioid abuse. In 2016, Mississippi was a leading prescriber of opioid painkillers.

“There are so many people that you don’t see the cause of death in their obituary and they are 40 years old to 58. A lot of the time, those are opioid overdoses, and these people are not committing suicide.” Hood said.  “It’s accidental overdose, and it’s not like they’re taking a whole lot of it, or just a handful or anything. They take a few additional pills and one night they don’t wake up. So, this is a crisis I hope our country will awaken to.”

Several attorney generals have asked insurance companies to start covering alternative procedures such as physical therapy and acupuncture for back pain, but Hoods says that the drugs are cheaper, and companies would rather pay for that.

“I think what we need to be doing is dropping a hammer on those that are selling it to deter that type of conduct, cutting off the flow of it through doctors, distributors, manufacturers and so forth.” Hood said.

Among those in attendance at the Department of Education building in Jackson was Detective Scott Moran with the Cleveland (Ohio) Police Department. Moran says that as a police officer, you have to change your mind set when dealing with addicts.

“I’ve been a narcotics guy for 16 years and a policeman for 22. As a narcotics guy, I’ve always thought drugs are bad. It doesn’t matter who it is, addicts, lock them up and throw them away,” Moran said. “When you start looking at it from a social standpoint, and how people get on these drugs; they don’t want to be on these drugs. They’re addicted to them and you’ve got to change your mindset where you want to help them get off the drugs.”

Moran believes this problem will change when the drugs aren’t easy to get access to.

“You can get them on Twitter, that’s how common they are. You don’t need to be on the dark web to obtain these drugs.” Moran said.

AD hopes that this training course can affect change in Mississippi and nationwide moving forward. President Trump declared the epidemic to be a public health emergency back in October 2017.