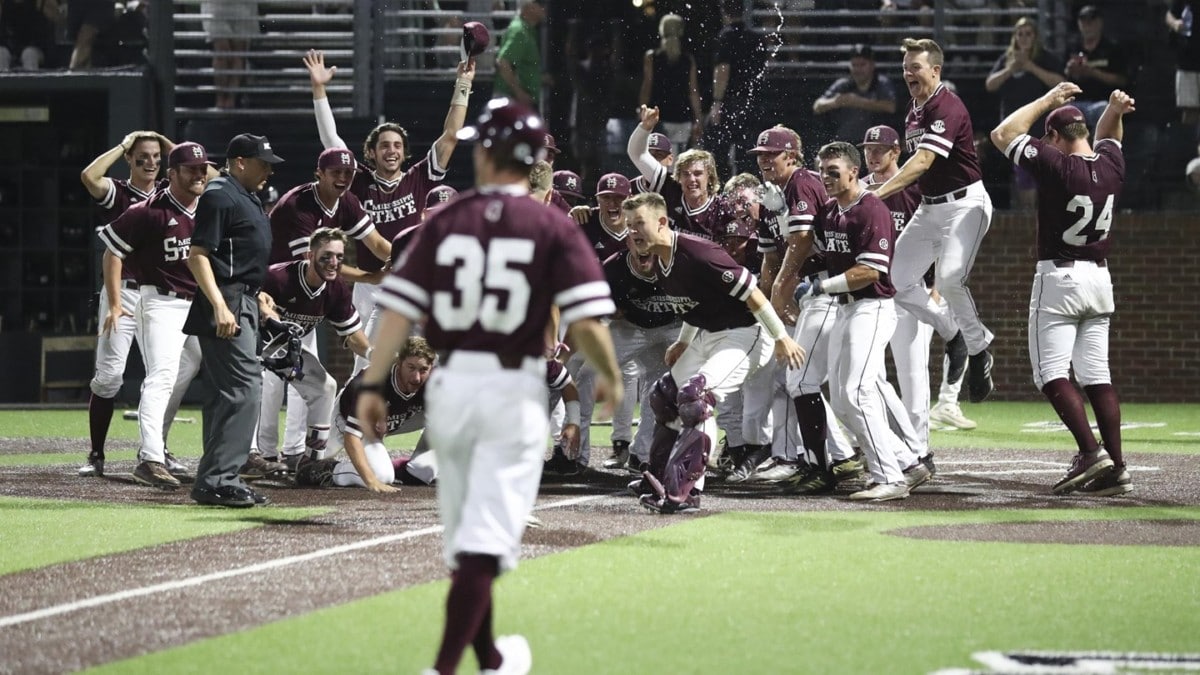 He did it in the matchup with Florida State last weekend, and in game one of the Super Regional against Vanderbilt, Elijah MacNamee played the role of hero once again with a walk-off home run in the bottom of the 9th. (MSU was the “home” team)

After what was nearly a disastrous top of the 9th, Hunter Stovall got things going with a base hit, and then MacNamee did the rest to give the Bulldogs a 10-8 win.

This kid is unstoppable!!!!! pic.twitter.com/wi2ECtlvih

Clinging to an 8-7 lead in the top of the final frame, Pat Demarco stepped to the plate for Vandy and nearly hit the ball out of Hawkins Field, and although it stayed in the year, Demarco would score on the play. Ruled an error, he made it to third, but a wild throw allowed him to come home and tie to the game at 8-8.

Many thought that MSU had the game locked down after a 5-run 3rd inning gave them a 7-2 lead. RBI base hits from Tanner Allen and Stovall set the stage for MacNamee’s first home run of the game, a 3-run shot in the 3rd.

Vanderbilt would battle back in the 5th inning with a 5-run inning of their own to tie the score at 7-7. After one runner scored on a wild pitch and another scored on a passed ball, the inning was highlighted by a drive from Demarco that did make it over the fence for a 2-run home run.

Another one of MSU’s most reliable players would strike in the 8th to give the Bulldogs another lead. After Luke Alexander reached on an error and eventually advanced to third, Jake Mangum was able to get a grounder to bounce over the head of the first baseman and drove Alexander in.

On the mound, MSU’s Ethan Small only went 4.0 innings while giving up 3 runs and 6 hits before he was replaced with JP France. France gave up 6 runs in 0.2 innings and was quickly pulled. Cole Gordon and Riley Self finished things up for MSU on the hill.

For Vandy, Drake Fellows got the start and went 4.1 innings while allowing 6 runs to score. Zach King finished the game and eventually allowed the MacNamee home run.

The two teams combined for 21 hits, but neither team’s pitching staff had a flawless defensive effort behind them as MSU had 4 errors in the game and Vanderbilt had 3. While the game may not have been pretty at times, MSU has made it this far by battling through whatever obstacle is thrown their way.

“It was far from pretty but this is a resilient team,” MSU assistant coach Jake Gautreau said. “Big hit Mac had another great night. Our team did a great job of staying the course. Just keep battling. That is what we have done the entire season.”

The Bulldogs are now just one win away from returning to Omaha for the first time since 2013.

Hyde-Smith supports $5B increase for VA