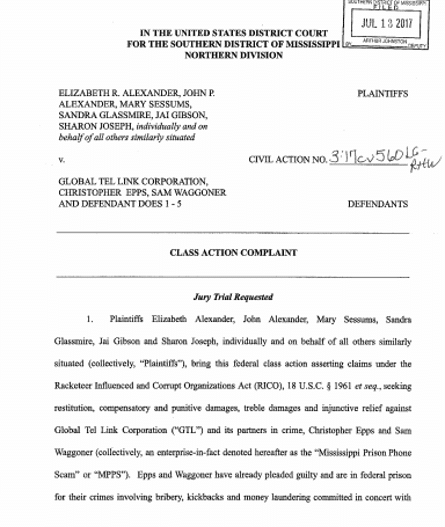 Last week a class action suit was filed with United States District Court for the Southern District of Mississippi against Virginia based company Global Tel Link Inc on behalf of thousands of inmates in Mississippi and their families.

The suit alleges that GTL conspired in criminal racketeering and price gouging when it came to contracts they acquired that provided telephone services used by prisoners in Mississippi jails. The suit comes after former Corrections Commissioner Christopher Epps was charged with accepting bribes in exchange for prison contracts. Epps is now serving time in federal prison.

The suit also brings into question Epps and business associate Samuel Waggoner who are accused of engaging in the criminal racketeering conspiracy they’re calling “Mississippi Prison Phone Scam.” Epps and Waggoner have already pleaded guilty to alleged crimes involving the conspiracy and the contract with GTL. The suit alleges that GTL was given contracts that allowed them to avoid competitive bidding for those contracts, as required by state law, and charging overly high rates from inmates and their families in order to use the phone services they provide.

According to the lawsuit,

“GTL stands atop an industry notorious for exploiting and gouging the weak and the defenseless. Through a concerted campaign of bribery, kickbacks, and public corruption, the Defendants gained a long-term monopoly over telecommunications between family members and friends and their loved ones incarcerated in various facilities in the State of Mississippi. The Defendants sought and maintained this monopoly with the specific goal of targeting the Plaintiff Class with exorbitant and rapacious fees and charges significantly higher than fair market rates and bearing no relation to the rates they were authorized to charge under GTL’s contracts with the State of Mississippi and local jailers. GTL split its ill-gotten gains with Epps and their bagman, Sam Waggoner, in furtherance of the criminal enterprise.”