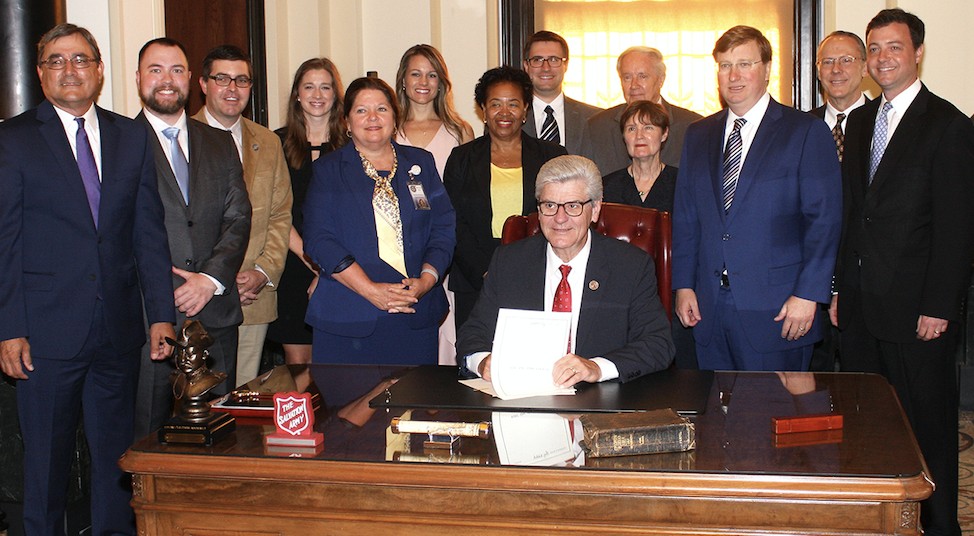 Photo courtesy of the office of Governor Phil Bryant.

Governor Phil Bryant signed the Mississippi Guardianship and Conservatorship Act, on Wednesday at the Capitol. Known as the GAP Act, the law will provide stronger protections for children and vulnerable adults.

The Governor held several bill signing ceremonies, signing the Criminal Justice Reform Act, the School Safety Act of 2019, the Landowner Protection Act, and the Tourism Protection Act among others.

Mississippi’s laws governing guardianships and conservatorships had not been substantially changed in more than 30 years. The old laws lacked provisions for oversight, monitoring, and accountability, and there had been incidents of fraud and abuse of vulnerable people.  The Supreme Court on April 13, 2017, created the Mississippi Commission on Guardianship and Conservatorship to develop recommendations to improve the way the courts protect children, vulnerable adults, and estates.

Senate Bill 2828, introduced by Sen. Joey Fillingane, is also known as the GAP Act, for “guard and protect.”  It was based on recommendations the Commission made after nearly two years of intensive study. The GAP Act aims to improve court processes for protecting children and vulnerable adults and their assets. The Commission made recommendations to create a clear and workable statutory framework, modern and enforceable reporting requirements, comprehensive court monitoring procedures, state-driven accountability measures, protection of the ward’s fundamental rights, and transparency from all parties.

“The purpose is to protect the most vulnerable,” said Supreme Court Justice Dawn Beam,  co-chair of the Commission on Guardianship and Conservatorship.

“It has been a long time coming,” Gov. Bryant said before signing the bill. The changes will go into effect Jan. 1,  2020.

The old statutes are confusing and vague, said Chancellor Joseph Kilgore of Philadelphia, co-chair of the Commission subcommittee on estate guardianships.

“There is nothing in the old statutes that tell a conservator exactly what they can or can’t do,” said Kilgore. “I truly feel that this bill makes great strides in the protection of the most vulnerable people among us.”

Chancellor Catherine Farris-Carter of Cleveland, co-chair of the adult guardianship subcommittee,  has seen cases in which family members misused a ward’s resources when put in charge of a vulnerable adult’s affairs.

“They absolutely waste and squander the resources,” said Farris-Carter.

The new law goes beyond accounting for money and possessions of those in need of assistance, Justice Beam said.

“The GAP Act places the well-being of the person on the same footing as their assets, which is huge for ensuring daily needs such as food, housing, and medical care are met for vulnerable children and adults,” said Beam.

The new law also allows judges to tailor guardianship and conservatorship orders to the needs of the person, allowing vulnerable adults to maintain some independence.

“Judges now have options for respecting the dignity of the person by recognizing there are varying degrees of disabilities,” said Beam. “This allows the court to tailor the restrictions on the ward’s rights, providing protections  where needed while allowing the ward to maintain independence when possible.”

Recognizing that some disabilities are temporary, the GAP Act sets out a process for ending legal restrictions when the ward recovers from an impairment.

“The thing that I am most excited about is that we finally have a process in place wherein consideration has to be given to the desires and wants of the ward,” Chancellor  Farris-Carter said. “Just because they have a physical limitation doesn’t mean they have mental limitations.”