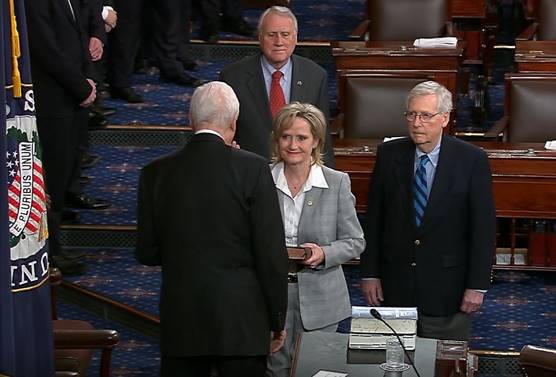 Senator Cindy Hyde-Smith has officially been sworn in.

Weeks after her victory in the runoff election for what was the final seat in the U.S. Senate, Hyde-Smith took the oath of office on the Senate floor.

The oath was administered by Orrin Hatch (R-Utah), President pro tempore of the Senate.

After the ceremony, Hyde-Smith stated that she’s ready to continue serving Mississippians in D.C.

“It is a great honor to serve Mississippi as a United States Senator.  I am committed to doing everything I can to represent the priorities of all Mississippians, and will continue to work to advance the needs of our state and the nation,” Hyde-Smith said.

Hyde-Smith will serve the remaining years of Thad Cohran’s term, and it was in the wake of Cochran’s retirement in April that Hyde-Smith was appointed by Governor Bryant.

With the victory, Hyde-Smith became the first woman elected to represent Mississippi in Washington D.C.

Since assuming office, Hyde-Smith has served on the Senate appropriations, agriculture, and rules committees.