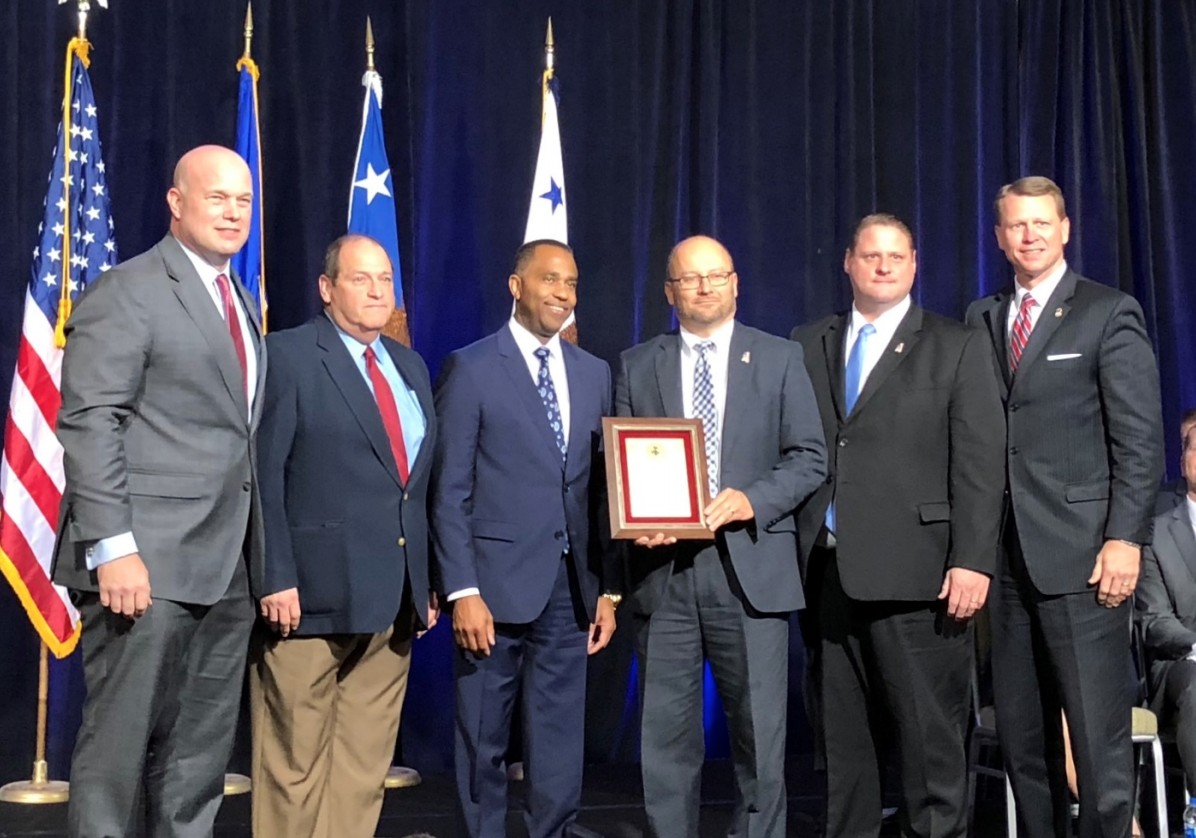 At the 2018 Project Safe Neighborhoods (PSN) National Conference, Acting Attorney General Matthew Whitaker presented the U.S. Attorney’s Office for the Southern District of Mississippi and its law enforcement partners with the award for Outstanding Overall Partnership/Task Force for Project EJECT.

Only 16 awards were given during the annual PSN National Conference, which recognize individuals and groups for their dedication and contribution to the success of PSN. Project EJECT was one of only two recognized as the best partnerships or task forces in the nation.

“Project Safe Neighborhoods is making our prosecutions more targeted and more effective—and that makes the American people safer,” said Acting Attorney General Whitaker. “Today the Department recognizes 16 examples of those who go above and beyond the call of duty in using PSN to reduce violent crime. We had a lot of impressive nominees, but even with tough competition, these 16 stood out. I want to thank each one of them for their service and congratulate them on a job well done.”

“Just one year ago, we launched Project EJECT with the intent of making our Capital City safer for everyone. I’m incredibly proud of what our partners, our office and our prosecutors have been able to accomplish in such a short period of time. By empowering our citizens and working together, and doing more than just prosecute crimes, we are reducing overall violent crime in the City of Jackson and making our communities safer. I look forward to continuing this important work in Jackson and expanding it throughout the Southern District in the coming year” said U.S. Attorney Mike Hurst.

In December 2017, the U.S. Attorney’s Office for the Southern District of Mississippi launched its PSN task force to combat violent crime occurring in Jackson, Mississippi.

“Just over a year ago, this initiative was only a concept aimed at using the assets and resources of the whole community to make Mississippi safer, and I am proud of the work that has been done by all of the agencies and partner organizations involved in the endeavor,” said Christopher Freeze, Special Agent in Charge of the FBI in Mississippi. “From the initial proposals and discussions about the objective of the project, to numerous investigations and successful prosecutions, our Special Agents, Task Force Officers, Intelligence Analysts and Professional Support staff have worked countless hours to reduce violent crime and make our communities safer, no matter who gets the credit. Although this is the only narrative most people hear, the center focus of our involvement is the culture our children and their children will face in the coming years. We hope that this initiative will continue to build a culture and community for today, for our children and for their children.”

EJECT stands for “Empower Jackson Expel Crime Together,” Project EJECT employs four platforms: prevention; prosecution; reentry and rehabilitation; and awareness. In addition to undertaking significant enforcement efforts, members of the task force conduct prevention activities at schools and non-profits, and engage the community through regular town hall meetings. This coordinated and comprehensive approach helped reduce violent crime in the City of Jackson by over 7% since this time last year.

“Project Eject is another example of the commitment of the ATF, the US Attorney’s Office and all of our federal, state and local law enforcement partners to impact and reduce violent crime in the city of Jackson,” said Dana K. Nichols, Special Agent in Charge of the Bureau of Alcohol, Tobacco, Firearms and Explosives New Orleans Field Division. “With the inclusion of the community and community leaders in Project EJECT, we have created a truly unique strategy and partnership that will pay dividends for the citizens of Jackson for not only this year, but for years to come. We are “ALL” committed to making our neighborhoods safer.”

DEA Assistant Special Agent in Charge J. Derryle Smith said Project EJECT inflicted a debilitating blow to the network of drug traffickers and violent criminals in the city of Jackson and beyond.

“This project continues a deliberate and strategic effort to cut off and shut down the supply of drugs and guns entering our cities and is a milestone in our tireless assault on these violent drug traffickers. The results of Project EJECT clearly demonstrate DEA’s commitment, along with the combined strength that federal, state, and local agencies, both in law enforcement and civilian, bring to bear in the battle to keep our neighborhoods safe. U.S. Attorney Hurst and his entire staff are to be commended for their continuing efforts into battling violent crime in the city of Jackson,” said Smith.

Safety tips for your Christmas decorations