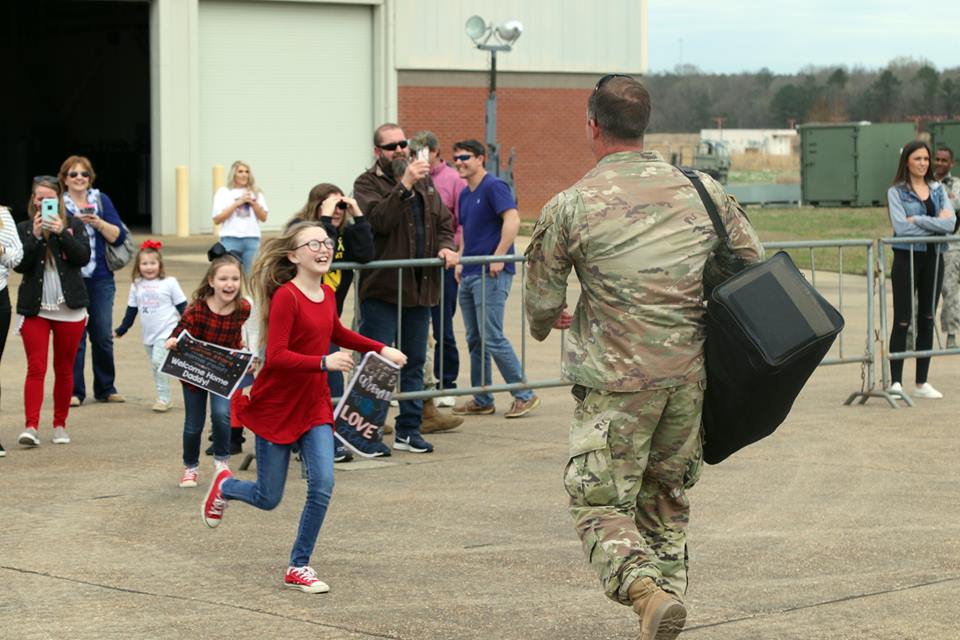 Photo courtesy of the 155th ABCT

More soldiers from the Mississippi National Guard’s 155th Armored Brigade Combat Team are back home. The soldiers began arriving back in the U.S., on February 16th and the brigade which has been deployed to the Middle East since July of 2018 has worked as a part of Task Force Spartan in support of Operations Spartan Shield and Inherent Resolve.

The soldiers were greeted by their families, Governor Phil Bryant, and First Lady Deborah Bryant along with State Treasurer Lynn Fitch.

In a post on social media, Governor Bryant expressed his gratitude to the veterans.

“We welcomed members of the 155th Armored Brigade Combat Team of the Mississippi National Guard back to Mississippi this evening from a long tour overseas,” said Bryant. “We owe them a debt of gratitude.”

It’s hard to describe my feelings as I watched these brave citizen-soldiers step off the plane, into the arms of their loved ones. Pride. Joy. Patriotism. Gratitude. Welcome home 155th Armoured Brigade Combat Team of @nationalguardMS. Thank you for your service! @PhilBryantMS pic.twitter.com/5V6lLxaUnt

“I am so proud of this brigade,” said Col. Robert D. Ferguson, 155th ABCT commander. “The work we have done throughout the U.S. Central Command Theater has directly contributed to regional stability and enhanced the capabilities of our partners here in the Middle East.”

The 155th is the first National Guard ABCT to assume the Operation Spartan Shield mission. Major General Janson Boyles serves at the Adjutant General for Mississippi’s National Guard and said when soldiers of the 155th return home, many will be searching for jobs.

The 155th brigade will conduct a transfer of authority at Camp Buehring, Kuwait in late March with 3rd ABCT, 4th Infantry Division, an active duty unit based out of Fort Carson, Colorado. The demobilization process is expected to take approximately 14 days with Soldiers returning to Mississippi upon completion. All 155th ABCT Soldiers are expected to be back in the U.S. by late March.

#MississippiReads: Donate books for kids and get a sweet treat