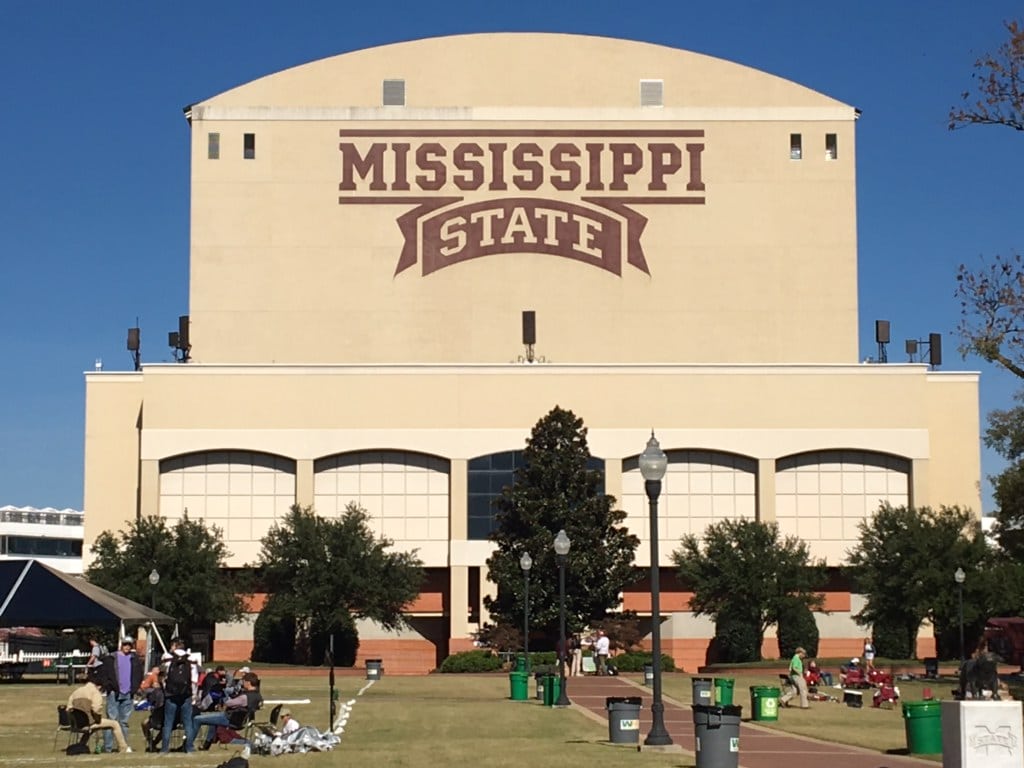 Mississippi State needed every second of Saturday’s game to come away with a 28-21 victory over the Arkansas Razorbacks. Tied at 21-21, the Razorbacks gambled on a 4th and 2 at their own 44 and lost. The Bulldogs forced a turnover on downs and took over with three minutes remaining in the game. The Bulldog offense, led by QB Nick Fitzgerald, moved the ball into FG range, but they didn’t stop there. Fitzgerald called his own number on a 4th and 1 and converted. Time continued to tick away, and the Bulldogs inched closer to the goal line. After an Arkansas timeout with 24 seconds left on the clock, Fitzgerald found WR Deddrick Thomas in the end zone for a go-ahead touchdown. A desperation hook and ladder for Arkansas ended the game, and Mississippi State picked up their 8th win of the year. Arkansas jumped out to a 14-0 lead in the 1st quarter, a quarter which included a fumble and a missed FG for MSU. The Bulldogs showed resiliency and fought their way back into the game. They trailed the majority of the 4th quarter, but two scores in the final 7 minutes saw Dan Mullen’s squad come out on top.

Next Week: Mississippi State has a chance to earn their second straight Egg Bowl victory and keep the Golden Egg in Starkville on Thanksgiving night.

It was a tale of two halves for Ole Miss as they fell to the Texas A&M Aggies on Saturday. 24 points had the Ole Miss offense flying high in the first half. When the 3rd quarter began, things began to unravel for the Rebel offense. Jordan Ta’amu and company couldn’t muster a single second-half point and a pick-6 in the 3rd quarter gave the Aggies a lead that they wouldn’t relinquish. In the first half, Ole Miss ran the ball effectively and played with a balance that their attack has been missing, but wasn’t able to carry that with them throughout the remainder of the game. The Aggie offense wasn’t much stronger in the 3rd and 4th quarters as both defenses played sharp and kept the opposition down. The Aggies kicked a FG with 2 minutes left to increase their lead to 31-24, so the Rebels had one last chance to drive down to tie the game. On a 3rd and 2, Ta’amu went to A.J. Brown, but a crucial drop led to a 4th down which the Rebels couldn’t convert and now fall to 5-6.

Next Week: Ole Miss has a chance to salvage their season and earn in-state bragging rights in the aforementioned Egg Bowl.

Southern Miss was able to put the Charlotte 49ers away early and earn their 7th win of the year. With a 38-7 score at the half, the Golden Eagles victory on Saturday was never in doubt. While Kwadra Griggs played well in his second straight start since taking the reins back from Keon Howard, USM did the majority of their damage on the ground. The Golden Eagle rushing attack accounted for 363 yards and 5 TDs. The leader of the bunch was Ito Smith who rushed for 153 yards and 3 TDs. On the defensive side of the ball, the 49ers were held to just 238 total yards and scored two of their three TDs when the game was well in hand. The Golden Eagle defense held Charlotte to 96 passing yards and forced two turnovers.

Next Week: Southern Miss will travel to Marshall for their final game of the regular season.