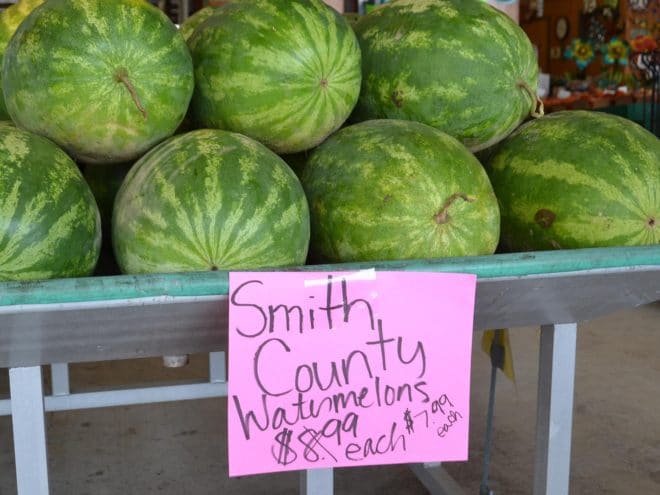 A balance of timely rain and sunny skies is essential for large, sweet watermelons, but too much rain can wreak havoc on the melons and hit producers in the wallet.

Although most of Mississippi’s watermelon crop is in good to fair condition, some producers are losing melons because of excess rain.

According to the June 25 Mississippi Crop Progress and Condition Report by the U.S. Department of Agriculture, 45 percent of the crop is in good condition, and 36 percent is in fair condition. But some growers in George County are among the 13 percent of growers with crops in poor to very poor condition.

“We are in terrible shape right now,” said Heath Steede, agent with the Mississippi State University Extension Service in George County. “I had a guy send 50 truckloads of watermelons to a buyer, and half of them were rejected. He estimates that he will lose about 60 acres.”

Steede said many fields are producing watermelons with a lot of water-soaked spots, which is a symptom of too much rain. Melons with these spots have slight blemishes and break open and leak within 24 hours of harvest.

“We made a really good crop, but we’re just losing them to the wet weather,” Steede said. “It’s been raining for the better part of four weeks with more in the forecast.”

Jeremy Maness, Extension agent in Smith County, said growers there have been more fortunate so far.

“We haven’t run into any problems yet,” he said. “We’re getting them out of the field as fast as we can pull them.”

Maness said Smith County has had about as much rain as George County, but a difference in field conditions may account for growers not losing melons.

“If there is not a lot of foliage, you don’t have a lot of shade on the melons, and that allows the soil to dry out a little more when we have had periods of sun.”

However, Maness is concerned about the second crop of watermelons that matures around July 10-20.

“We haven’t had any heat yet this summer, and if it doesn’t start warming up and drying out, we could start seeing melons rotting in the fields,” he said.

Casey Barickman, an Extension vegetable specialist and researcher with the Mississippi Agricultural and Forestry Experiment Station, said most growers have not experienced major disease problems, despite the wet summer, because of diligent fungicide application.

“In any given summer, insects and disease are a challenge,” Barickman said. “Plant diseases, such as phytophthora blight, fruit rot, powdery mildew, gummy stem blight and anthracnose, have a tendency to take hold in watermelon fields as a result of heavy moisture.”

Even in favorable weather conditions, growers should always implement a routine scouting schedule.

“Insects, such as spotted and striped cucumber beetles, beet armyworm and thrips, are also pests that farmers need to scout for in their field,” Barickman said. “A good scouting program for insects and disease is critical to stay on top of preventative measures that control these plant pests.”

According to USDA estimates, watermelons are grown on about 4,000 acres in the state. But Barickman said that estimate is probably a little low.

“There are more acres that go unaccounted for in local markets, especially for smaller growers around the state,” he said.