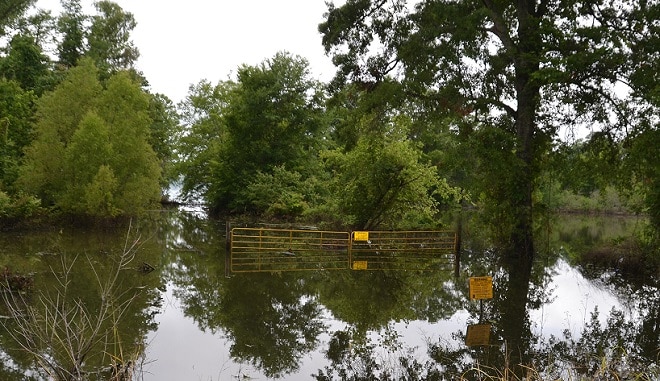 Although favorable spring weather helped many producers plant their corn, cotton and soybean crops early, most growers now need fields to dry out.

Well-timed early spring rains helped corn producers avoid irrigating their crops, but flooding from recent excess rain will force some to think about replanting with soybeans.

“I can’t remember the last time we’ve not had to irrigate corn before tassel,” said Erick Larson, grain crops specialist with the Mississippi State University Extension Service. “In general, corn has gotten off to a good start due to drier weather during planting time in March and April. The crop came up quickly with few emergence issues.

“Lately, rainfall has generally been quite frequent but often scattered, so there have been some drier spots around the state,” he said. “Significant flooding from high river levels along the Mississippi River and the Yazoo River will cause some farmers to lose their crops.”

Producers with crops under water may not be able to plant another crop for several weeks. They stand to suffer considerable losses from crop inputs already in the field, such as seed, fertilizer and herbicides. Soybeans are often the replanting crop of choice because of their wide planting window. However, late-season soybeans face more intense insect, heat and drought stress, likely making them less productive and considerably riskier, Larson said.

Extension cotton specialist Darrin Dodds said wind is an additional issue for cotton producers. Some producers recently replanted fields after sandblasting damage from high winds. Some will need to replant flooded acres, and others just need to get their seeds in the ground.

“Everybody is wet,” Dodds said on May 30. “We have a fair amount of cotton that needs to be planted the first time. The north Delta has a chance of rain every day this week. If they can’t get in there and get it planted in the next few days, most of them will probably switch to soybeans.”

Dodds estimates Mississippi will have 600,000 to 650,000 acres of cotton, down from the 700,000 acres he believed the state would produce at the beginning of the planting season.

“We have places that can’t miss a rain and some that need it,” said Trent Irby, Extension soybean specialist. “We are very close to finishing, but we just can’t catch a break in some places with the weather.”

“Nobody can spray right now,” said Jason Bond, Extension weed scientist. “When it does dry out, we’ll be pushing the envelope a little on timing.”

“It’s very early in the cotton growing season, but we’ve made fewer applications for thrips than most years at this time,” he said. “In the next seven to 14 days, I expect to see more plant bug applications.”

Extension professionals, scouts and soybean producers have found adult and immature redbanded stink bugs in the past two months, but their numbers have not yet reached treatable levels in fields. Potential insect problems are hard to predict, but the presence of these yield-reducing bugs so early indicates they may be a significant problem for Mississippi producers this year, Catchot said.

With a little more time to get crops in the field, said Extension agricultural economist Brian Williams, the recent wet weather should not affect the market. However, supplies of these crops will affect prices.

“We have large supplies of old-crop corn and soybeans, and South America is harvesting a bumper crop. When the record soybean acreage is piled on top of that, that has pushed prices down,” he said. “Cotton is a bit of the opposite. While we are expecting a larger cotton crop this year, the strong demand for cotton has kept pace with supply. That has helped to hold cotton prices steady in comparison to soybeans.”

The current price for south Delta cash cotton is $75.48 per hundredweight. Greenville soybeans are selling for $9.03 per bushel, and Greenville corn is bringing $3.65 per bushel.

Your Mississippi forecast for Thursday, January 26