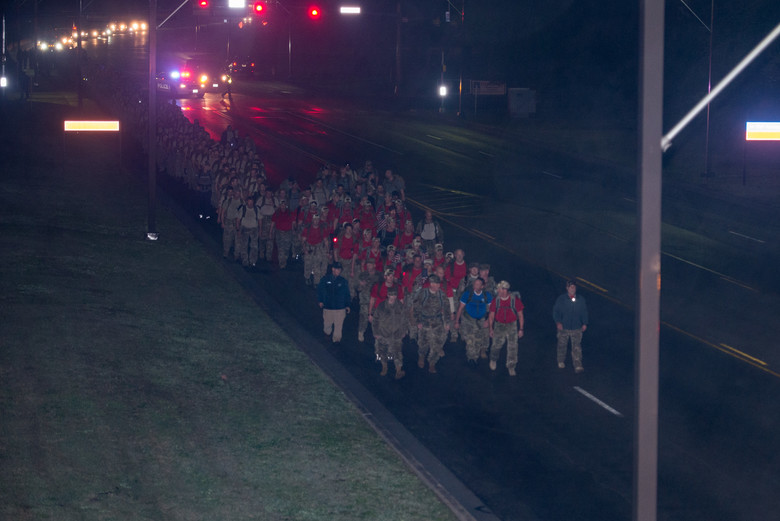 Hundreds of Special Tactics (ST) Airmen and Special Warfare trainees gathered early morning to begin an 830-mile ruck march across five states in tribute to U.S. Air Force Staff Sgt. Dylan J. Elchin, along with 19 other ST Airmen, who have been killed in action since 9/11, Feb. 22, 2019, at Joint Base San Antonio-Lackland Medina Annex. The ruck march is projected to average about 12 miles per leg, alternating between the ten teams of two throughout the day ending at Hurlburt Field, Fla., at 1:00 p.m. on Mar. 4, 2019. The 830-miles event will take over 11 days averaging 70 miles each day. (U.S. Air Force photo by Andrew Patterson)

Residents of Biloxi and the Gulf Coast will be able to watch a unique military tradition Friday afternoon and evening as two Special Tactics Airmen ruck along U.S. 90. In Biloxi, on Friday night the duo will be joined by about 50 Keesler officers and airmen at White Avenue.

A “ruck” or load march, involves a small group of military, mostly in pairs, traveling long distances while carrying backpacks that, with a rifle, can weigh up to 70 pounds.

The Special Tactics airmen, in 10 two-person teams, are rucking from Medina Annex at Lackland Air Force Base, Texas to Hurlburt Field, Fla., covering 830 miles over 12 days, to pay tribute to Staff Sgt. Dylan J. Elchin who was killed in Afghanistan on Nov. 27, 2018, and in honor of the other 19 Special Tactics Airmen who have been killed in action since 9/11.

The estimated times of arrival:

Although the team will be traveling on sidewalks and boardwalks along U.S. 90, motorists on U.S. 90 Friday night should expect intermittent lane closures.

Keesler leadership from the Second Air Force and the 81st Training Wing as well as airmen stationed at Keesler Air Force Base will march alongside the special tactics team starting from White Avenue and U.S. Hwy 90 in Biloxi. The beach fire pits along U.S. 90 will be lit in a show of support. Additionally, the public has also been invited to support the Special Forces team as they march through the region.

“This ruck march serves to help us remember our fallen brothers and their families,” said Brig. Gen. Claude K. Tudor Jr., 24th Special Operations Wing commander. “We want to make sure they’re never forgotten. Whether or not we knew each of the men individually, they’re part of our team. They’re our brothers in arms.”

“Dylan was a dear friend of mine,” recalled O’Hearn. “He was the type of person who lit up the room. He always had a smile on his face and lifted up his teammates and friends in any situation. He always made the situation better and was someone you always wanted to be around.”

The special tactics marchers include former Keesler Air Force Base training students and the group will be carrying a memorial baton inscribed with each of the fallen Special Tactics Airman’s for the entire journey. They are marching in memory of:

Waller qualifies to run for Governor in 2019