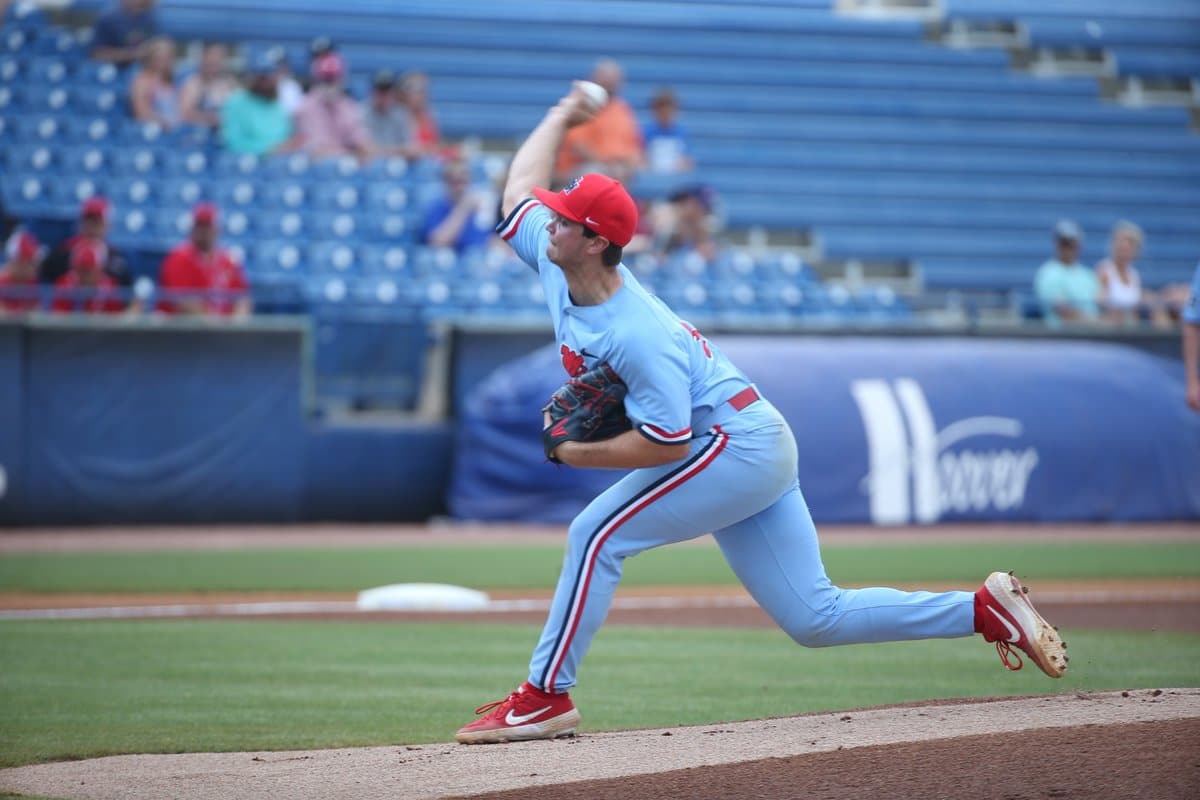 Hoover – As he sauntered from the on-deck circle toward the batter’s box, Thomas Dillard saw Arkansas catcher Zack Plunkett remove his mask and head towards the mound. Pitching coach Matt Hobbs emerged from the dugout and signaled to the bullpen.

The switch-hitting Dillard began to retreat back to the dugout to swap his right elbow guard for his left and replace his left-handed batting helmet with his right-handed one. He knew laboring right-hander Zebulon Vermillion was coming out of the game and that the Razorbacks’ most potent weapon, All-American left-handed closer Matt Cronin, was coming in to get Dillard out.

“When I walked up Vermillion was in, but I knew in the back of my mind I was going to face Cronin,” Dillard said.

Armed with a fastball Dillard dubbed the best in college baseball and a devastating slider, Cronin posed one hell of a challenge. The game hung in the balance with Ole Miss trailing 2-1 with runners on first and second with one out. In a 5-3 loss to the Razorbacks on Tuesday, Cronin recorded the final four outs via the strikeout, including a whiff of Dillard on three pitches. Dillard won this battle, shooting a first-pitch fastball into center field to tie the game.

“He’s blown it by a few times in college,” Dillard said. “If anything I was going to pull it into their dugout. I wasn’t going to be late. I got one up in the zone. Luckily, I got a good pitch and was able to put a good swing on it.”

A Grae Kessinger sacrifice fly three pitches later gave the Rebels a 3-2 lead that their bullpen would not relinquish in a victory over the Razorbacks to advance to the semifinals of the SEC Tournament. The win vaulted Ole Miss back into the hosting conversation and shrunk its RPI to 23 as of this writing. A win over the Georgia Bulldogs on Saturday could likely be enough to force the selection committee to grant June baseball at Swayze Field.

Ole Miss has now won back-to-back baseball games on a grand total of five hits and four runs. Its pitching has been immaculate in this tournament, the latest case 6.1 innings of three-hit, two-run baseball from Gunnar Hoglund. In a trying season littered with hard lessons, the former first-round draft pick of the Pittsburgh Pirates delivered the longest outing of his short career when his team direly needed it. He struck out six and walked two.

“It’s just really a process,” Gunnar said. “I had to get my curveball better. You can’t make too many mistakes at this level. It is about learning and getting better.”

Hoglund retired the first nine batters of the game. The second time through an opposing batting order has been unkind to Hoglund. It is often a when he begins to struggling, tumultuously unwinding any productive work he’s produced the first time through. The fourth inning appeared to be further evidence of that. He walked leadoff hitter Trevor Ezell on four pitches. Two batter later, Matt Goodheart launched a hanging breaking ball over the center field wall of Hoover Metropolitan stadium, an area where baseballs are swallowed up by the gigantic confines of its outfield more often than not.

“I did not think that ball was getting out today,” head coach Mike Bianco said. “Not many balls get out where he hit it.”

Two sharply hit singles to right field followed. Hoglund appeared to be spinning towards another unraveling. He stranded the two runners, stranded the bases loaded the next inning after an error, a walk and a hit by pitch. Hoglund did not allow another hit after the fourth inning.

“I was just leaving pitches up,” Hoglund said. “My focus was on staying down in the zone and making quality pitches.”

Kevin Graham cut the deficit in half in the fifth inning when he clanged a Connor Noland fastball off the scoreboard. The solo shot was Graham’s ninth of the season and the Rebels’ second hit of the game. Offense has been hard to come by for a lineup that has scored in droves at other points in the season. Their pitching staff has given the ailing lineup a lift over the last three days. Hoglund handed the baseball to Austin Miller in the seventh, who stranded two singles in 1.2 innings to bridge the game to the ninth. The offense mustered two runs to take the lead in the bottom half of the eighth. Cooper Johnson drew a leadoff walk and stood on second after an Anthony Servideo sacrifice bunt. Jacob Adams was beaned in the foot by Vermillion and eventually came around to score the winning run on Kessinger’s sacrifice fly.

Parker Caracci recorded his second save in as many days with a scoreless ninth inning. Caracci pumped 95 mph fastballs at the Razorbacks, looking more like the closer that earned preseason All-America honors and less like the man who struggled to record outs and preserve leads the last three weeks of the regular season.

“Parker is one of the toughest guys I know, outside of baseball or in baseball,” Dillard said. “He’s had some things not go his way in life. A few bad outings is nothing to him. We know he is going to bounce back. We have all the confidence in the world in him. He has some of the best stuff out there.”

Caracci was not the only struggling arm in a bullpen that has been a bit of an enigma down the homestretch of the regular season. That bullpen has now produced eight innings of one-run baseball in Hoover and has preserved three one-run leads. This week afforded Ole Miss an opportunity to learn about itself in some ways and fix the sores that shackled the team from reaching its potential. The bullpen ranked at the top of the list.

“A lot has been made of that,” Bianco said. “A lot of it is probably deserved but some of it is timing and things just happening. We have talked a lot about Caracci and he pitched well. But Myers has pitched well. Miller was good again today. Roth has pitched well. We need to continue to get innings out of these guys. Because come tournament time you need that.”

Ole Miss’ chances at a hosting spot seemed slim entering the week. The Rebels needed a deep run in this tournament to get back into that conversation and they are well on their way to accomplishing that. Georgia is the No. 3 RPI team. It is throwing Friday night starter Emerson Hancock and will throw Saturday starter Tony Locey in relief to set its pitching optimally for next week’s Athens Regional. Ole Miss will have its hands full. Houston Roth will start. A win on Saturday could very well be enough for Ole Miss to host a regional. But there is really no way to be certain about it. It is on Bianco’s mind but does not dominate his thoughts. His team is playing better and beginning to find itself in late May. That is what makes him rest easier.

“We have tried as best we can to drain that out,” Bianco said. “Someone told me today if we won it would be our 20th win the top 50 RPI teams. We have played 40, which leads the country. It is a lot of numbers and a lot of things that the guys in Indianapolis will figure out. I guess you have to be careful because we are climbing up the ladder.”