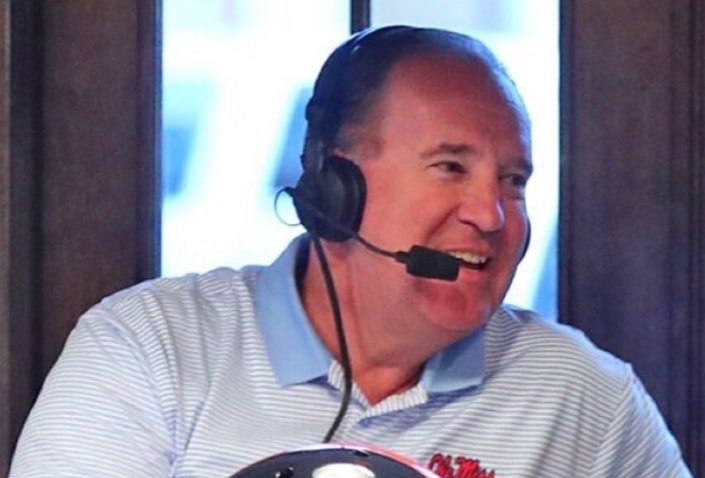 If you’ve turned on your radio at any point over the past 40 years to listen to an Ole Miss Baseball game, you most likely heard the voice of David Kellum, the voice of the Ole Miss Rebels.

Kellum called his first game in 1977 when the SEC tournament rolled through Oxford and he was in the right place at the right time. When a man came into Bryant Hall on the Ole Miss campus looking for someone to call the games, Kellum (a high school senior at the time) volunteered and got his shot. After that, he landed a job with a local Oxford station and began calling Ole Miss Baseball a year later.

40 years later, any Rebel fan knows the sound of his voice as he sits behind the microphone for football, basketball, and baseball. When it comes to how much longer he’ll do it, he’s not slowing down any time soon, but there is a time limit.

“My wife will not allow that, she won’t let me have 40 more years,” Kellum said. “It is amazing, it’s gone by kind of fast.”

While baseball may not be quite as fast-paced as the other sports that Kellum announces, he says that baseball is still his favorite “by a hair”. He went on to say that the pace allows him to discuss more than just what is happening on the field, and he said it’s like having a conversation with the audience.

“It’s like a conversation with your grandad,” he explained.

To help develop his own unique style, Kellum says that he looked to broadcasting icons such as Cardinals announcer Jack Buck, the late voice of the Rebels Stan Torgerson and Dodgers announcer Vin Scully.

“You gather some stuff, and you try to put your own stamp on things, obviously, but those are the ones that made me want to be a play-by-play guy,” Kellum said.

FACT: Every time @RebVoice calls an @OleMissBSB homer – an angel gets its wings.

As an Ole Miss alum, Kellum relishes the opportunity to lead the broadcast team for his alma mater. When it comes to the in-state rivalry between the Rebels and the Bulldogs, Kellum wouldn’t trade it for anything, but he says that it has evolved over the years and that may need to be reeled back in at times.

“When you’re an Ole Miss grad and you have the diplomas on the wall, you can be a homer,” he said. “I wouldn’t trade that rivalry for anything. It has made the passion for sports in our state what it is today, in baseball, football, basketball…I think if we played tiddlywinks, there would be people trash talking each other, but it’s a wonderful rivalry. It’s gotten kind of nasty in recent years, hopefully, we’ll be a little kinder to each other as we move along.”

While it’s been 40 years of baseball for Kellum, this upcoming season will be his 30th for football and basketball. At the beginning of his career, Kellum also announced women’s basketball games, and he says that he continues to have a great appreciation for the women’s game.

Someday there will someone else in the booth, but to an entire generation of Ole Miss fans, Kellum will always be the true “voice of Ole Miss.”

Shattering the silence about teen suicide