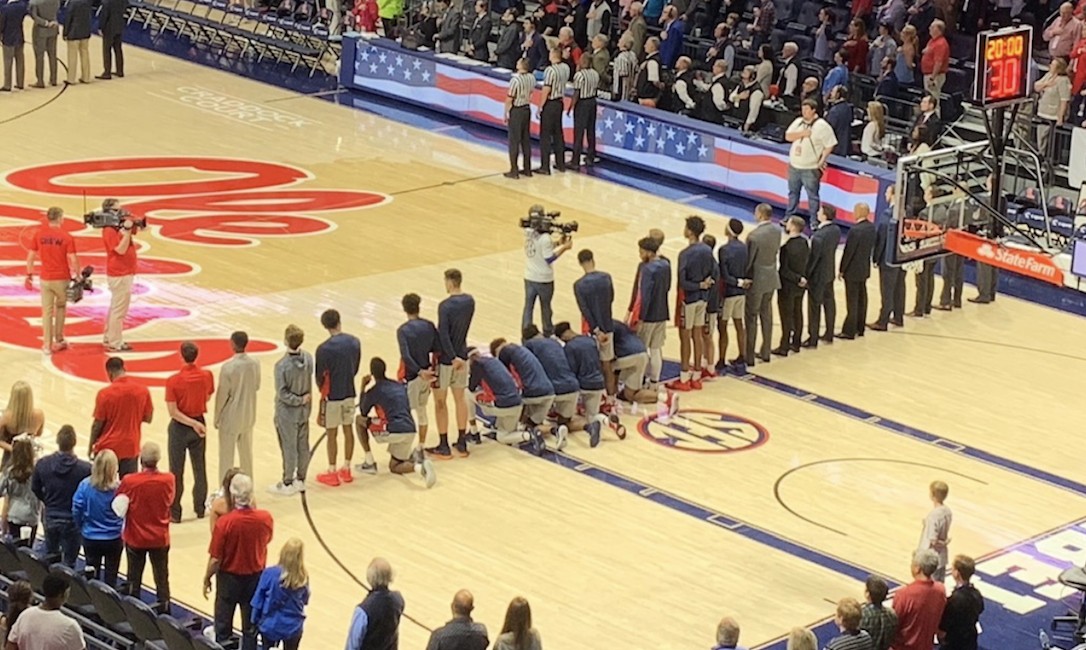 Prior to tip off in Oxford this afternoon, several Ole Miss basketball players took a knee during the National Anthem to protest the pro-confederate rally that occurred on the Square and on campus during the day.

As the roars from a pro-Confederate rally echoed less than two miles away, inside The Pavilion before Ole Miss’ eventual 72-71 win over Georgia, eight players kneeled during the National Anthem in protest of the hate groups arriving in Oxford and on the Ole Miss campus.

“We are tired of these hate groups coming to our school and portraying our campus like it is our actual university having these hate groups,” junior guard Breein Tyree said. “The majority of it was we saw one of our teammates doing it and we didn’t want him to be alone.”

Head coach Kermit Davis said he was not aware of the players’ intention to kneel, but unequivocally supported their right to expression.

“This was about the hate groups coming here to spread racism and bigotry in our community,” Davis said. “It has caused a lot of tension. Our players made an emotional decision to show these people they are not welcome on our campus. We respect our players’ freedom and ability to do that.”

“We’d like to make it aware that it is out-of-state groups coming to our campus,” Davis said. “I think that is what has upset our community. Breein Tyree and these guys have a great love for the University of Mississippi and they want our campus and our school portrayed in a great way.”

Davis said he’s talked to a couple of parents of players on the team including Tyree’s mom. Tyree said he does not anticipate this being a multi-game protest said it was more of a decision to show solidarity in the moment. The players did not hash a plan before the game to kneel.

“We have never done it before,” Tyree said. “It really just has to do with them coming to our campus during a basketball event and that going on during the game.”

“Our job is to teach and educate every single day,” Ross Bjork said in a statement.  “You know what, they’re human. They’re students. They see what’s happening on our campus and these people that come here and spill hate and bigotry and racism, we don’t want them on our campus. Our players stood up for that. It had nothing to do with the anthem. It had nothing to do with anything beyond, ‘You know what, we don’t want those people here. They’re protesting during our game and that’s not right because that’s not the Ole Miss that I know.’ We talked to them about that in the locker room and that’s their expression. We support them. We don’t want those people here either. The university doesn’t want them. Our town doesn’t want them. They’re out of state. They’re not from here. And so, you know what, good for the players for standing up and making a statement.

“I think we have to really look at it for what it is and it’s about these outside groups from out of state and that’s it. I love what Breein said.”

Ole Miss went on to win the game and earn its 9th SEC victory of the season. The Rebels are a win away from locking down an NCAA Tournament bid.