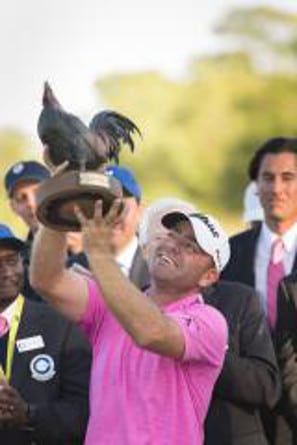 Armour joins ten other players who have made the Sanderson Farms Championship their first tour win.

“We are very pleased, as we had a very beautiful week in Mississippi, and the course was spectacular,” said Joe F. Sanderson, Jr., Chief Executive Officer and Chairman of the Board of Sanderson Farms. “Sales for the tournament were up over a year ago, both Pro-Ams were sold out early, and interest in the tournament has increased every year, translating into more contributions to charity. The weather was good although we had some windy, cool moments yesterday, but the rest of the week was exactly what we were looking for when we moved the tournament from July to October. The course was dry and fast, and the greens were excellent. We are thrilled that we have another first-time winner as our champion. Ryan Armour put on a wonderful display of golf this week.”

“This was an unbelievable experience. I would love to thank the people of Jackson for hosting us, 50 years to do anything is a long time, and we appreciate you for letting us come to your town and take over your golf course. It’s a truly special place,” said Armour. “There’s lots of emotions running through my head. Part of me wants to fly home immediately and see my wife and kids, and part of me wants to stay here and hang out with the boys. It’s great, it’s job security for a few years, and it’s a validation to win with a lot of fairways, a lot of greens, and a lot of putts.”

The Sanderson Farms Championship is the fifth of 45 events in the 2017-18 PGA TOUR season.

The tournament also donates a portion of the proceeds to 60+ additional charities arounds the state.