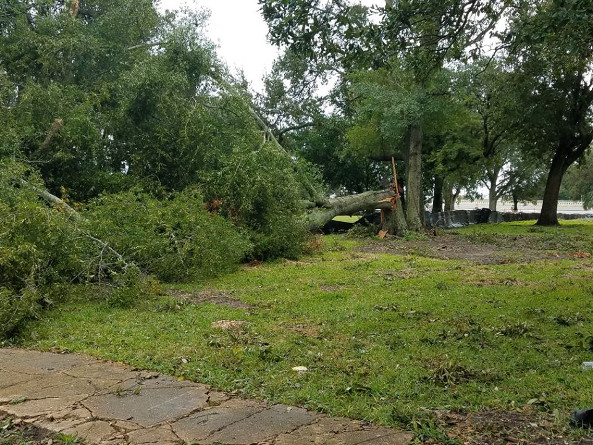 The City of Biloxi is still hard at work to clean up the city in the aftermath of Hurricane Nate.

Biloxi Public Works crews have picked up 250.4 cubic yards of debris from neighborhoods this past week, and Mayor Andrew “FoFo” Gilich said he hopes residents and property owners will use the weekend to haul any remaining debris to the curbside.

Pelican Waste, the new trash contractor for the Harrison County Utility Authority, plans to be making debris sweeps through Biloxi neighborhoods over the weekend, with city crews following up next week.

The new company asked for and received permission from HCUA to run Saturday and Sunday, and Coastal Landfill has agreed to open an extra day, Sunday from 7 a.m. to noon, to accommodate Pelican’s extra effort.

“This is great news,” said Mayor Andrew “FoFo” Gilich. “In terms of debris, we want to get this storm in our rear-view mirror. Pelican is certainly making an effort, but we also need help from residents, business owners and owners of vacant property. We’re asking you to invest time this weekend in moving that debris out to the curb where Pelican or our crews can get to it.”

That 250.4 cubic yards of debris city crews picked up since Monday is enough to fill 20 dump trucks or cover a football field with about a quarter-inch thick of carpet of debris, according to Jonathan Kiser, who oversaw the removal of three million cubic yards of debris as city’s Katrina debris czar.

The city is using the FEMA Debris Estimating Field Guide, which says one ton of mixed debris equals four cubic yards. “Mixed debris” is defined as construction and demolition debris along with vegetative debris, such as tree limbs or leaves.

City officials said that when moving debris to the curb, please make sure to place it is at least three feet from mailboxes, fire hydrants, utility poles and their guy wires, or any obstacle that could be damaged by the machinery used to scoop up debris and place it in trucks.

They added that residents should bag any leaves that they are hauling to the curb.

Bagging the leaves keeps them from blowing into the street and clogging storm drains. Additionally, the knuckle boom trucks being used to scoop up debris are not nimble enough to scoop up loose leaves.

The Harrison County Utility Authority says that Waste Pro, its former garbage, trash and recycling contractor, has picked up 20,000 of its original 50,000 carts, and is picking up about 1,200 carts a day. The HCUA said it wants all carts removed no later than November 3.