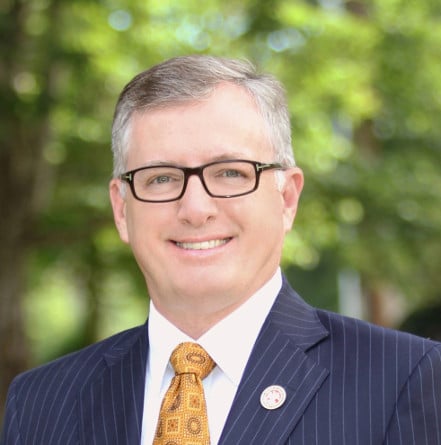 The 2019 race for Lt. Governor officially has a candidate.

While on with the Gallo Radio Show on Supertalk Mississippi, Rep. Jay Hughes (D) has announced that he intends to run for the office currently held by Tate Reeves (R). Hughes currently represents Lafayette County in the House, and he says that he wants to make an impact state-wide.

“It wasn’t so much me arriving at the decision, it was by traveling around the state and talking to people and realizing that even though we get so focused in the Capitol on what is going on and what we think is important, what’s really important out there is the 88-year-old man who lives across the bridge and the bridge won’t work and an ambulance can’t get to him. What’s important to the people is education, mental health care, addiction treatment for loved ones and roads & bridges. Those to me, are what’s important and we don’t tend to be focusing on that in Jackson, so the people convinced me that we need something different in Jackson.”

Hughes mentioned that bi-partisanship can be an important player in politics and that in order to get things done for Mississippians, the House and Senate must work together.

“It starts with someone who is not a seasoned politician, who believes in compromise and respect,” Hughes said. “I can see myself walking down the hall each day saying ‘Mr. Speaker, tell me what are important issues for you because I would like to find out and tell you what mine are. Let’s work together and let’s work together for the people and not for the special interests’.”

Staying with the theme of focusing on outside influence on the state’s governing body, Hughes said that he wants to provide an open door policy for Mississippians.

“I’ve seen a lot of things in a short period of time in the Capitol, but a regular person who has not made a campaign donation does not get into the Lt. Governor’s office unless it’s a photo-op with a kid,” he said. “I believe in keeping the doors open and inviting anyone in, that’s my goal.”

Known across the state as one of the leading voices for public education, Hughes’ tagline “it all starts with education” has become synonymous with his agenda. Hughes was also tabbed by state Democrats to issue the party’s response to this year’s ‘State of the State Address’ from Governor Bryant before this year’s session began. In that speech, Hughes discussed the disparity that he sees between different school districts across the state.

The simple reality is that there’s absolutely no equality with the type of school buildings, classroom supplies or technology from one district to the next. This division has continued to keep Mississippi in last place,” Hughes said. “Every single school should have at least the exact same basic resources for the children. Not one school district having new computers and robotics machines . . . . .and the school district next door having calculators and popsicle sticks.”

Once a Republican, Hughes switched political parties back in 2004, but says that he considered himself to be a “fiscal conservative and a gun owner.” Despite the shift in his political affiliation, Hughes stated that he does not a political party define him.

“I think what defines me is the fact that I don’t get my morals, values or ideas from a national political party or a cable news network,” Hughes said. “I got those from my late father, my grandfather and the school of hard knocks.”

The Army veteran is currently an attorney in Oxford and has served in the House since 2016. He also previously served as an Oxford Alderman. Hughes will hold press conferences in Jackson, Biloxi, Hattiesburg, Meridian and Oxford throughout the day to kick-off his campaign.

The election for Lt. Governor will take place in November 2019.