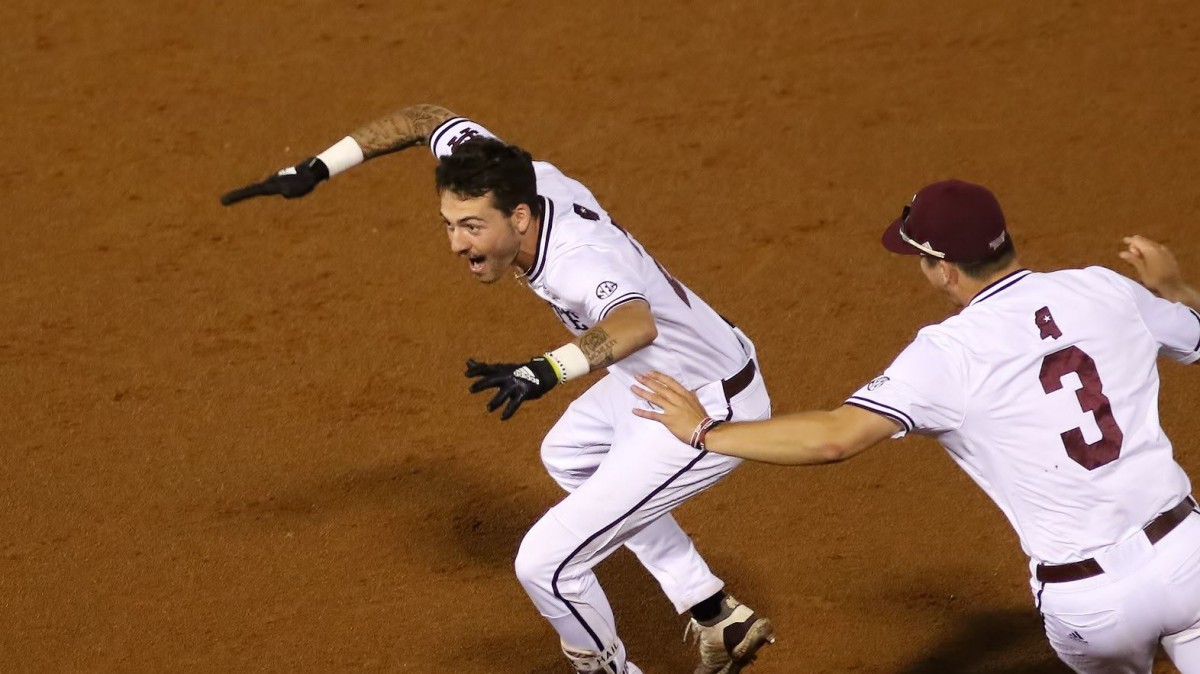 When Mississippi State plays LSU, you can usually rely on a script, the Bulldogs will take an early lead but miss a few chances to blow the game open, the Tigers will rally to tie it up, then take the win in the late innings. If you’re going to break that script, something out of the ordinary has to happen. That is exactly what occurred at the Hoover Met in the late game Wednesday, as the Bulldogs and Tigers fought through 17 innings before the maroon and white finally took the win, 6-5, on Gunner Halter’s walk-off single.

Halter played right field for the first time in his career, one of four to man the #9 position for State in a game that saw 11 pitchers throw 552 pitches, a combined 30 hits, and 38 stranded on the base paths. MSU had the winning run in scoring position five times before Halter was finally able to deliver a knockout blow.

The Bulldogs will take on the #1 seed and SEC Champions Vanderbilt for the first time this season in the late game Thursday.

GUNNER HALTER WALKS IT OFF.@HailStateBB WINS IT IN THE 17TH!! pic.twitter.com/s2uIoFI6K2

Mississippi State got off to a strong start against LSU, scoring in the first three innings to take a 4-0 lead, but the Bulldogs kept leaving runners on the bags. After an HBP forced in a run in the bottom of the third, MSU wouldn’t cross the plate again until the bottom of the 16th, when Jake Mangum’s bouncer was mishandled and Rowdey Jordan came around to tie the game back up after LSU had grabbed a 5-4 lead in the top of the frame. All of this set the stage for Halter’s heroics, which came after Justin Foscue’s swinging strike 3 got away, then another missed third strike advanced him to second. After an intentional walk to Jordan, Halter came to the plate and got hold of a curveball on the first pitch to score Foscue and win it for the Bulldogs at 3:02 AM.

GORDY GETS IT DONE

GORDY, what a gem!

The SEC Tournament is all about finding a way to win while not using up all your pitching in the first two days. Mississippi State got a huge boost when Cole Gordon reached back to his days as a starter, coming in in the top of the ninth and throwing 5 innings of scoreless relief. The Bulldogs still used seven pitchers, but Gordon’s strong work kept some arms available for tomorrow and beyond. We may not see Gordon again unless the Bulldogs can get to Saturday, but he definitely did his part in keeping his team alive.

It’s the showdown we didn’t get to see in the regular season, as Mississippi State will finally go toe to toe with the champions from Vanderbilt. State will put their ace on the mound in Ethan Small, the Commodores will counter with ten game winner Drake Fellows. First pitch is tentatively scheduled for 8 PM at the Hoover Met.