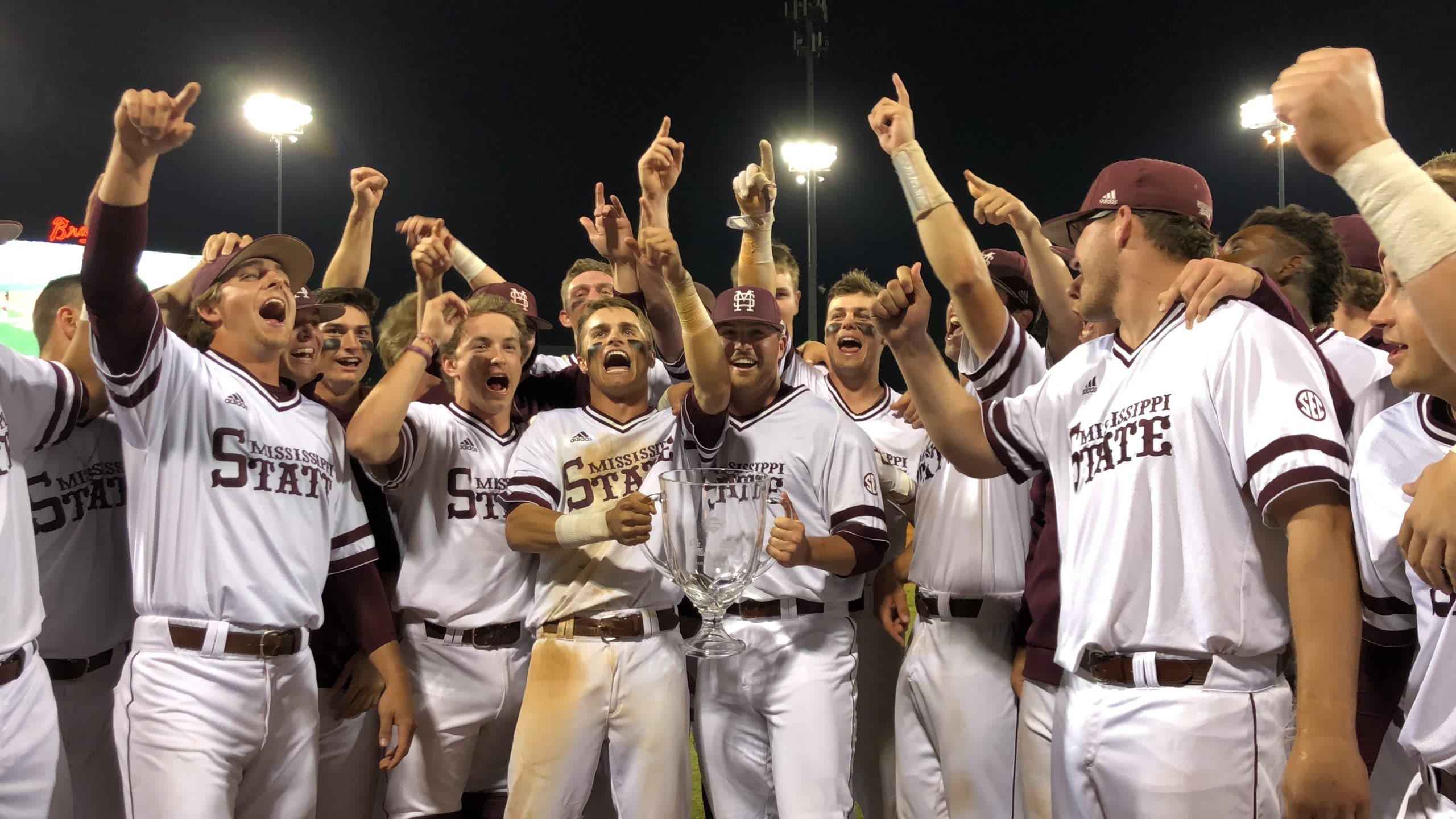 For the second time this season, Mississippi State has walked-off to take down Ole Miss, and this time the win has kept the Governor’s Cup in Starkville for the third straight season.

Both teams showed the ability to fight back as the lead continued to change hands throughout the game, and Ole Miss’ 2-run rally in the top of the 9th gave the Rebels a 6-5 lead heading into the bottom of the frame, but the Bulldogs had one rally left in them to walk-off with a 7-6 win.

Parker Caracci took the mound for the Rebels in the 9thand had a night he’d like to forget. A lead-off single from Marshall Gilbert, who also had a solo HR on the night, got things started for the Bulldogs, and a sac-bunt put the pinch runner in scoring position.

Jake Mangum stepped to the plate, and the Rebels decided to intentionally walk the MSU slugger in favor of pitching to Luke Alexander, who made Ole Miss pay. Alexander drove a ball into the gap and plated two-runs to deliver the walk-off win for MSU. After Mangum drew the intentional walk, Alexander was ready to step up and end the game in dramatic fashion.

“The way I look at it is as a disrespect to me, saying that I wouldn’t be able to get it done, and I took that into the at-bat. I knew what I was looking for, a pitch out over the plate, and I drove it in the gap and beat them,” Alexander said after the game.

This wasn’t the first time Alexander has doomed Ole Miss. In the 3-game series between the two rivals in early April, Alexander knocked a 2-run walk-off HR in the bottom of 10th in Starkville.

“Growing up, when I finally chose to go to MSU in the 8thgrade, I knew they were going to be our rival. Ole Miss is not well-liked in Starkville and for me to be able to do it the first time, turn around and do it again, it’s just awesome,” Alexander said.

The game had its fair share of momentum shifting moments and it gave the packed house at Trustmark Park in Pearl quite a show. Early on, a Thomas Dillard 2-run HR for Ole Miss swung the game in their favor, but a ground rule double from Elijah MacNamee drove in the tying run in the bottom of the 4th.

Ole Miss would once again take a lead in the 5th, but MSU would even the score in the 7th thanks to Gilbert’s solo shot. A lead-off Tanner Allen triple in the 8th led to a 5-4 Bulldog lead after Jordan Westerburg drove in the run.

In the top of the 9th, Ole Miss was down to their final three outs and roared back to life after Will Golsan got on base by way of a leadoff walk. A drive from Chase Cockrell nearly left the park, but it bounced off the wall, but it was enough to score Golsan and tie the game at 5-5. Pinch-hitter Michael Fitzsimmons stepped the plate, and drove Cockrell in, and the Rebel faithful were flying high with a 6-5 lead before the Bulldog bats spoiled the night for Ole Miss.

When asked after the game if this type of win gives him confidence in his team’s resiliency, MSU interim head coach Gary Henderson said that it certainly does.

“Well yeah, wouldn’t you say so?” he rhetorically asked. “To give up two in the top [of the 9th inning] and going back out there and getting them back in the bottom, that’s huge. I’m proud of our kids. Really, really proud of them.”

On the mound, Rebel starter Jordan Fowler was chased after 3.1 innings while allowing 3 runs, forcing Ole Miss to dive into their bullpen earlier than expected. Greer Holston stopped the bleeding and allowed just 1 run in 3.1 innings of work. Will Stokes came in for the 8thand allowed the Gilbert HR, and Caracci takes the loss after giving up the final two runs.

State’s starter Denver McQuary went 5.0 innings also allowing 3 runs, and the Bulldogs used five different pitchers from their pen to get them through the end of the game. Three different pitchers got the three outs in the 9th and Cole Gordon gets the win.

The Bulldogs have now won four in a row including their weekend sweep of #3 Arkansas. After their rocky start to the 2018 campaign, MSU is playing winning and confident baseball as they get set to enter the final four weeks of the regular season.

“We’re at a different spot, and that doesn’t guarantee you anything moving forward, but we are clearly at a different spot than we were in early March or late March for that matter,” Henderson said. You’ve got to keep playing well, but we put ourselves in a position to play well and reap the benefits if we can continue to play well.”

This game doesn’t count toward the teams’ SEC records, but it’s another late-game loss for Ole Miss. They lost late leads to MSU the first time around, two to Vanderbilt and one to UGA this past weekend. After the game, head coach Mike Bianco says that they have to continue to fight and that he still has faith in his squad to eventually win these close games.

“It’s tough, but you got to keep playing and the good thing for us is that we’re in those games, and a lot of people aren’t. Sometimes I think you’ve got to get over the wall and keep pushing through. We feel good about where we’re at, and we’ve just got to continue to play,” Bianco said.

As far as the rivalry goes, it has been one-sided as of late in favor of MSU. The Bulldogs have won 6 of their last 7 against Ole Miss, and have taken home the past three Governor’s Cups.