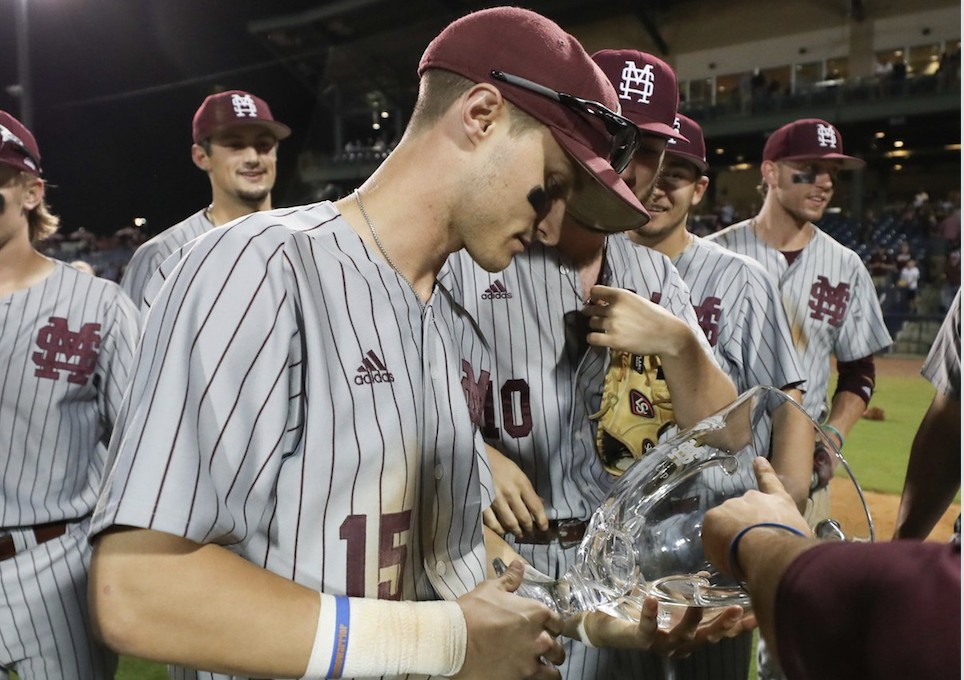 Last night, Mississippi State won their 4th straight Governor’s Cup over Ole Miss at Pearl’s Trustmark Park by an 8-1 final score. SportsTalk Mississippi’s Brian Hadad and Brian Scott Rippee were at the game to provide insight from an MSU and Ole Miss perspective, and you can read their thoughts on the game below.

Mississippi State Makes it Four in a Row, Captures the Governor’s Cup in 8-1 Win Over Ole Miss

Mississippi State needed to put last weekend’s miserable performance at Arkansas far behind them, and the opportunity for a midweek clash with their old rivals from Oxford gave the Bulldogs just what they needed. State took down Ole Miss 8-1 in one of the most complete games of this season. Peyton Plumlee gave MSU its first quality midweek start in months, and the Bulldog bullpen combined for 5 scoreless innings behind him.

State touched Rebel pitching for 7 hits, and took advantage of two errors for the final tally. State improves to 33-9 overall, an incredible 23-1 in non-conference play. Here’s some video from postgame as the Bulldogs celebrated another win over their archrivals.

We talked to two Bulldog players, first, the winning pitcher, left-hander Trysten Barlow, who bounced back nicely from his rough outing at Arkansas on Saturday.

We also spoke to sophomore second baseman Justin Foscue, who was named MVP of the game.

Finally, Coach Chris Lemonis discussed what this game meant for his team going into a crucial weekend series with Georgia.

Mississippi State will back at home this week for a three-game with the SEC leaders, the Georgia Bulldogs. Ethan Small and JT Ginn are scheduled to start Games 1 and 2, and Sunday’s starter will be announced later, it could likely be Plumlee again depending on how he feels on game day. We’ll discuss this game in great detail on the Thunder & Lightning Podcast, and on SportsTalk Mississippi.

Rebels leave 12 on base, bullpen implodes in Governor’s Cup loss to Mississippi State

Compounding one mistake with another has plagued Zack Phillips often, leading to damaging innings and abrupt departures in what has been a struggle of a 2019 season.

But it was the defense and bullpen ineptitude that delivered Phillips a worse result than he deserved, exacerbating misplaced pitches with errant throws and misplayed fly balls in Ole Miss’ 8-1 loss to Mississippi State at Trustmark Park on Tuesday.

Phillips left the game with one out in the sixth inning, having only surrendered one hit on a solo home run and a pair of walks in a 1-1 game. The junior saw the sixth inning for the second consecutive outing. Phillips commanded his pitches as good or better than in any of his nine outings. The first two months of the season were a struggle, working through mechanical issues and falling victim to his own costly mistakes. But his last two outings have been productive and he believes he’s found his form.

“It was a good outing, but it could’ve been better,” Phillips said. “Everything looked sharp. Everything has been getting better each week. I am looking forward to my next outing.”

It was Phillips’ third consecutive outing in which he was productive enough to give Ole Miss a chance. He was saddled with the loss, but deserved a better fate. He was charged with three runs, two earned, on the single hit that came on a Rowdey Jordan solo shot in the fifth inning.

“He was terrific,” head coach Mike Bianco said. “It is disappointing to waste that kind of effort. He gave us every opportunity to win the game.”

Things went awry as Phillips faded into the shadows of the dugout. He exited with one out and two runners on base that reached on an Anthony Servideo error and a four-pitch walk. Max Cioffi gave up a single to Elijah MacNamee to load the bases and then a two-run double down the right field line to Justin Foscue on a ball that hung in the air and eluded a diving Chase Cockrell, squirting past Cockrell towards the warning track. Those were the only two batters Cioffi would face as Austin Miller relieved him and got the Rebels out of the inning with only a sacrifice fly’s worth of additional damage.

A 4-1 Bulldog lead ballooned to 7-1 with another three spot in the seventh. Miller gave up back-to-back of singles to nine-hole hitter Marshall Gilbert and leadoff man Jake Mangum to put men at the corners with no one out. Jordan Westburg chopped a ground ball to Tyler Keenan at third base. Keenan elected to go home with the throw, but Gilbert beat Cooper Johnson’s attempt at a tag. A Tanner Allen single scored Mangum and then eventually Westburg as Johnson hurled the baseball into centerfield for the Rebels’ second error in as many innings.

Ole Miss scattered eight hits in this game and left 12 men on base. The Rebels were 3-of-19 with runners on base and 2-of-12 with men in scoring position. The team has not plated more than five runs in a game since the series opener against Kentucky seven games ago.

“We have to be better,” Grae Kessinger said. “There is so much more potential on this team and we know it. We have to get it in gear, dig deep inside of us. I think we all have confidence that it is going to come.”

The bullpen allowed five runs in total. Miller was charged with three, two earned and Cioffi and Houston Roth each got tagged with a run.
Mississippi State scored in every inning from the fifth to the eighth and the Rebels’ lone shutout frame after the fourth inning came from Greer Holston, who made his first appearance of the season in the ninth. He hit the leadoff batter and walked the next guy, but stranded the runners with a pop up, fly ball and ground out.

“A lot of butterflies honestly, more than I thought,” Holston said. “It feels great to get back out there with the guys I have grinded so hard without throughout the fall and the past three years.”

Holston was told there on Monday there was a chance he would pitch in this game. He battled dead arm through the offseason and up until recently, had not performed to a level that would warrant putting him in a game. Holston’s struggles, along with the regression of Jordan Fowler, have left the Rebels to cope without two guys that, at the end of last season at least, were thought to be two incremental pieces on this pitching staff, either in the weekend rotation or two of the first options out of the bullpen.

What Holston’s role will be going forward, if any, remains to be seen. Overall, his scoreless ninth was drowned out by another underwhelming defeat that leaves the Rebels losers of five of seven with the No. 7 Texas A&M Aggies coming to Oxford for a series beginning on Thursday.

“We haven’t played well for a couple of weeks collectively,” Bianco said. “There have been times here and there. But consistently and collectively, we have not played well. The last two times on the field, when the pressure got hot we didn’t handle it. That is not what you are supposed to do with a veteran club.”