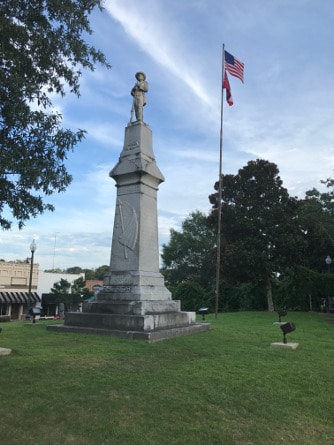 Confederate monuments across the U.S. are coming under fire, but some people are wondering if Mississippi’s Confederate memorials can be taken down.

Senator Angela Hill says the current law allows any government entity to move the monuments to a more suitable location at their own discretion.

Hill, who serves as the Vice-Chair of the Wildlife, Fisheries and Parks committee said she wonders if the monuments are truly protected.

Hill has authored a new bill concerning the Confederate monuments that she plans to introduce during the upcoming legislative session.

“I don’t want the public to be misled about what is in the code right now, because a lot of people don’t think that the monuments can’t be moved in Mississippi, that they are protected, that they can’t be moved into a junk yard or the basement of the court house, but in my interpretation of the bill that can certainly happen,” said Hill.

The new bill that Hill is proposing looks to clarify the language of the current law and ensure that the monuments would not be destroyed or removed from the public view.

And the law doesn’t just apply to Confederate monuments.

“The law that we have, the way that I understand it, protects all war monuments, not just the civil war, but all war monuments in MS,” said MS Representative Randy Boyd. “So, if someone were to come in and try to do something to the Korean war or a World War II monument, it would be the same law that would affect all of them.”

“We have already seen all kinds of stuff, names of things altered on college campuses already,” said Hill. “There’s been no penalty for that, so really, the law that is on the books is not really worth much.”

While cities across the state contemplate whether they should take down their Confederate memorials, Hill said updating the current law could stop some cases going to the courts.

“To have some clarity to it I think would probably stop a lot of litigation and a lot of headaches in the future especially where historic preservation is concerned,” said Hill.

Recently, Attala and Lefleur counties and the city of McComb have all been petitioned to take down Confederate monuments.

“With a state that has cities like Natchez, it has the antebellum homes, some of the finest examples of architecture are still left in this state from that period and I think that that is really a tourist draw because of the unfortunate past that we have, but people are interested in learning about it,” said Hill. “I see people come from all over the world in this state that are looking at Mississippi’s past. I see more people coming to learn, than I do that want to boycott Mississippi.”