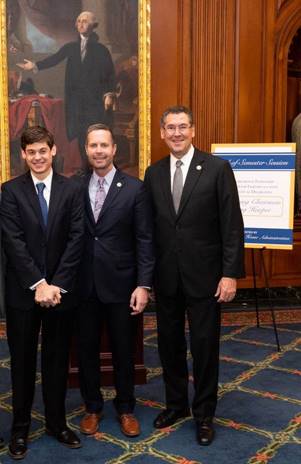 Photo courtesy of the U.S. Committee on House Administration.

The Congressional Internship Program for Individuals with Intellectual Disabilities (CIPIID) will be renamed after the founder of the program, Mississippi Congressman Gregg Harper and his son Livingston.

Harper of the Committee on House Administration and his son Livingston.

“My office has participated in this program for several years, and I know the value and joy it brings not only to the participants but also to the Members and staff of the offices they work in,” said Davis. “I cannot thank Gregg enough for creating this important program, and it is my great honor to announce that the CIPIID Program will now be known as the Gregg and Livingston Harper Congressional Internship Program for Individuals with Intellectual Disabilities. Chairman Gregg Harper has been a champion for disabilities, and I will ensure that his legacy, the Harper Program, continues on our Committee in the 116th Congress and beyond.”

Harper served as the Chairman of the Committee on House Administration during his time in the U.S House of Representatives and will be retiring from his role as Congressman in January 2019.

“My son, Livingston Harper, has served as the inspiration for me during my time in Congress to focus on improving the lives of those with Intellectual Disabilities (ID). When I came to Congress and realized there was no internship program for individuals with ID, I worked with the Committee on House Administration to begin a program back in 2010. I and many others on Capitol Hill have been positively impacted by the influence and hard work of these interns. I am grateful to the Committee’s future Ranking Member, Rodney Davis, for seeing that the program will continue under his leadership.”

The Congressional Internship Program for Individuals with Intellectual Disabilities was established by Representative Gregg Harper in 2010 and was designed to give students with varying intellectual disabilities an opportunity to gain congressional work experience. Working in conjunction with George Mason University’s LIFE Program – a postsecondary education program for young adults with intellectual disabilities – Harper launched the internship program with three Mason LIFE students and six House offices. To date, nearly 200 unique congressional offices from the House and Senate have participated.