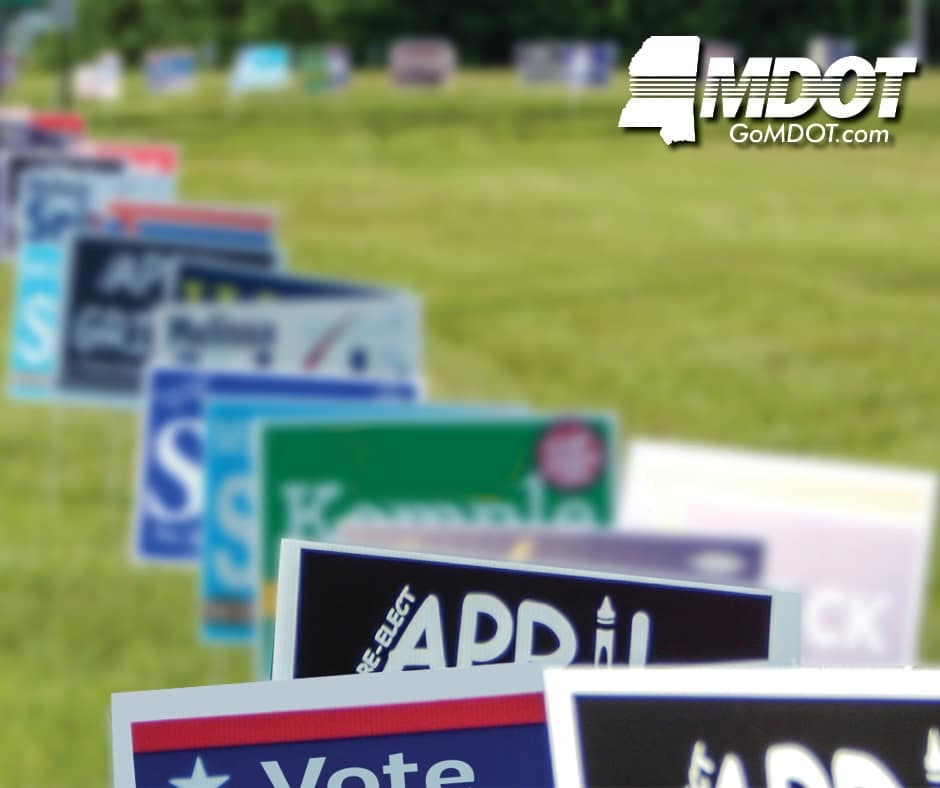 Every year when election time rolls around, travelers will begin to see a plethora of campaign signs that are placed throughout the state on billboards and along highways. Some of these campaign signs are legally placed, and unfortunately, some signs are placed in unlawful areas. The Mississippi Department of Transportation (MDOT) wants to remind candidates of the importance of placing signs legally and disposing the signs correctly when elections are over.

According to Section 63-3-317 of the Mississippi Code of 1972 Annotated, it is illegal to place signs within the right-of-way on state highways. Keeping the right-of-way clear is important because it prevents safety hazards and possible interference with the traveling public along roadways. Signs can also pose a threat to visibility, impairing driver’s vision.  Political signs with steel or wooden posts can harm roadside workers and their equipment if they are left along state highways.

“Political signs should be placed in legal areas so that motorist and roadside worker safety is not put in jeopardy,” said Melinda McGrath, MDOT executive director. “It is important to know the laws regarding campaign sign placement because it can become a problem before and after an election.”

MDOT workers will remove any signs that are found in unlawful areas. These signs will be kept for two weeks at a local MDOT maintenance facility before being discarded. Candidates can retrieve these signs from MDOT without any penalty.

“Political signs contribute to the $3 million MDOT spends every year on removing liter from our highways,” said McGrath. “If election litter can be disposed of correctly, then that extra money could be put towards maintaining our highway system.”

Litter rates on Mississippi’s rural roads are 30 percent higher than those of neighboring states. Mississippians view at least 71 percent of litter that is left on interstates and rural highways. MDOT encourages candidates to run a litter-free campaign to conserve Mississippi’s beauty and keep travelers and road workers safe.