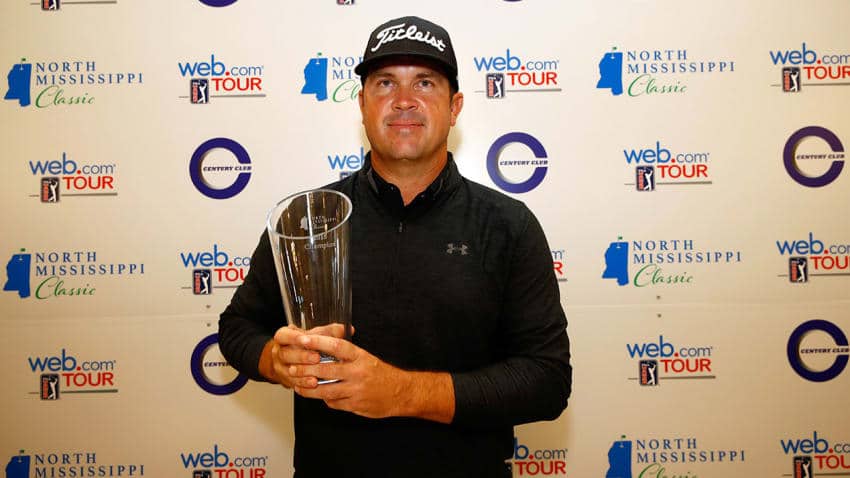 The inaugural North Mississippi Classic has come to an end, and Eric Axley took home the hardware with a final score of 12- under par.

Axley was declared the inaugural tournament champion after Web.comTOUR officials were forced to cancel the final round due to heavy rains that led the course to become unplayable. Axley ended the week at 12-under 204, three strokes ahead of Willy Wilcox, Sebastian Munoz, and K.H. Lee.

This was Axley’s first win since the 2006 Valero Open, and after the win, he said that it was good to make it back to the top of the leaderboard.

“It feels good,” Axley said. “It’s been a while since I won on this level, and it always feels good to win.”

After a picture-perfect first three days, rain began falling in Oxford during the early-morning hours Sunday. After mid-morning play was suspended, players waited around the clubhouse and range in anticipation of news about resumption. The uncertainty was cleared up at 2:40 p.m. when TOUR officials deemed the course unplayable and congratulated Axley on his victory – his second professional win in the state of Mississippi (2003 Capitol City Open, NGA Hooters Tour).

“We looked at the forecast and knew they had moved [final-round] tee times up,” Axley recalled, “This isn’t our first rodeo, so we thought that there may be a chance that we didn’t play today. Our goal yesterday was to play like it was the final round and we went out and played well, and it ends up it was the final round, so we got the win.”

Despite the rain, Axley said that the $99,000 check for the winner was an unparalleled birthday present.

This check will probably be the best [birthday present] I’ve gotten,” Axley joked.

Tournament staff and volunteers presented Axley with the check and trophy at a ceremony immediately following play. In the ceremony, executive director of the tournament Steve Jent praised the host city and club for the hospitality.

“We wish to thank all the volunteers and spectators who came out this week in support of the tournament, the City of Oxford who was amazing in hosting us, the Ole Miss Athletic department, and last, but not least, the staff and members of the Country Club of Oxford who graciously let us take over their beautiful facility for the last ten days,” said executive director Steve Jent.

Jeff Hubbard, Century Club Charities president, said that a lot of planning went into this event, and reflected on how many people it took to make it all come together.

“We started planning this tournament over a year ago on behalf of the 250 members of Century Club Charities,” said Jeff Hubbard, Century Club Charities president. “This is the first time I personally have worked with the Web.com TOUR staff, and couldn’t have asked for a more incredible team. We also want to thank Archie and Cooper Manning for hosting a stellar Pro-Am event on Wednesday.”

The Mannings hosted the Pro-Am earlier in the week with all of the proceeds from the event going toward children’s charities across the state of Mississippi.

Opioid deaths continue to rise in first few months of 2018