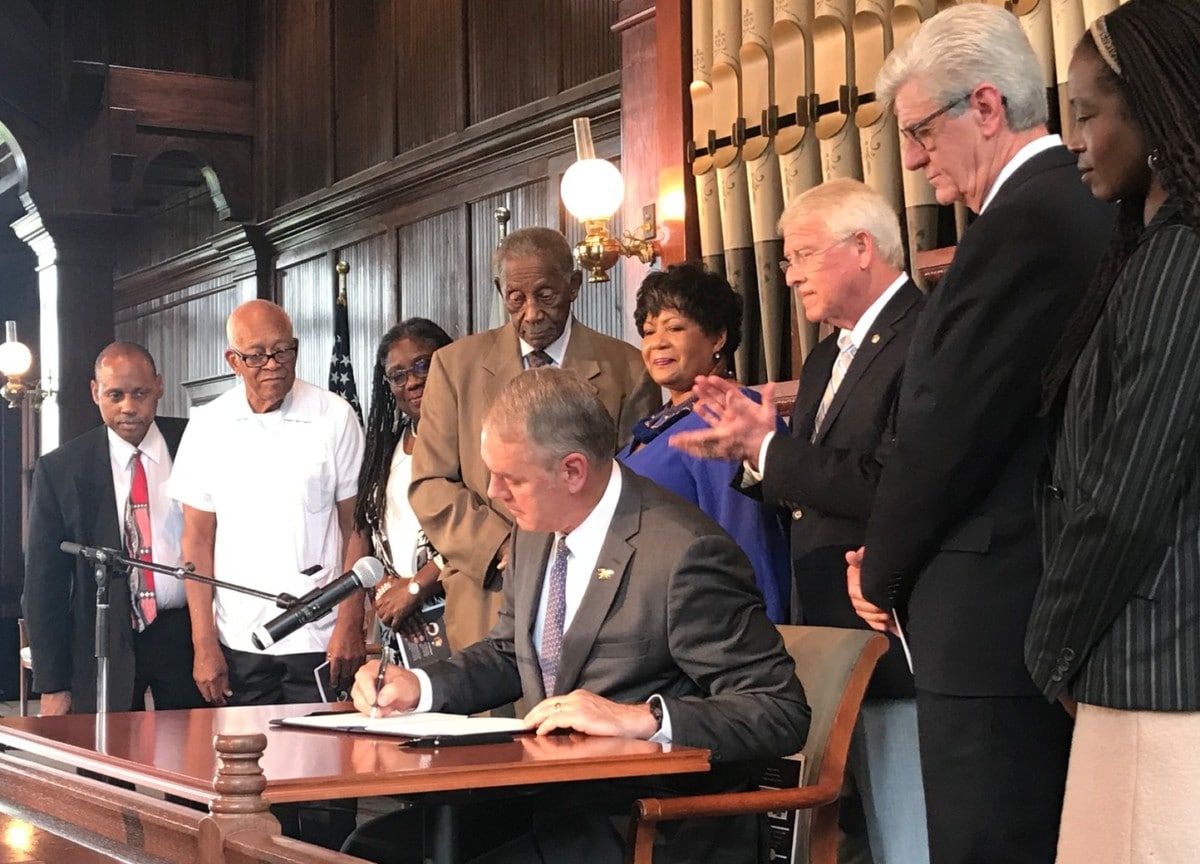 Today U.S. Secretary of the Interior Ryan Zinke designated the Medgar and Myrlie Evers Home as an official African American Civil Rights Network (AARCN) site. He also announced the Trump Administration is opening up the formal public comment process to designate the home a national monument. The home, which is located in Jackson, Mississippi, is the fourth site to be designated under the African American Civil Rights Network Act, which was signed into law by President Donald J. Trump in January 2018.

The network includes historic locations that tell the history of the civil rights movement in the United States. Secretary Zinke made the announcement at the historic home, which has been owned and preserved by Tougaloo College since the 1990s, and was joined by members of the Evers family including Medgar’s brother, Charles, his daughter, Reena Evers-Everette, as well as Governor Phil Bryant, Senator Roger Wicker, and Tougaloo College President Dr. Beverly Hogan.

“Both Medgar and Myrlie Evers were fearless civil rights leaders who fought for equality and justice. The death of Medgar Evers reverberated throughout the nation and served as a catalyst to the civil rights movement,” said Secretary Zinke. “His life and the home he shared with his wife serve as a place of both reflection and teaching of what Medgar, and many others, have given up in the fight for equality in our nation. It’s an honor stand with members of the Evers family, the community, and local officials to add it to the African American Civil Rights Network.”

Merle Evers started by thanking Tougaloo College and President Hogan for helping preserve the legacy and contributions Medgar made in the fight for African-American civil rights.

“We are honored that the Department of the Interior would add the Medgar and Myrlie Evers Home to the African-American Civil Rights Network,” said Evers. “We hope one day to be celebrating together as we announce that it has been named a national monument.”

Governor Phil Bryant said from Medgar’s service during World War II to his efforts to advance freedom and equality at home, he dedicated himself to improving the lives of others.

“Myrlie Evers has tirelessly, and with profound elegance, continued his work. It is so appropriate their home receive this designation, in recognition of the contributions the Evers family has made to Mississippi and America,” said Governor Bryant. “I am so grateful to Secretary Zinke and everyone else who made this special day possible.”

Senator Roger Wicker stated that the Medgar and Myrlie Evers home is an outstanding addition to the African American Civil Rights Network.

“This designation will help more Americans learn about the life and legacy of Medgar Evers and the civil rights movement in Mississippi,” said Senator Wicker. “I commend Secretary Zinke and the Trump Administration for their commitment to honoring and promoting our history.”

“This home is significant, not just as the scene of a tragic murder, but also as a symbol of the great sacrifices made to advance civil rights by individuals and families,” said Senator Hyde-Smith.

Beverly Wade Hogan, President, Tougaloo College, said that Medgar Evers’ life stands as a bastion for the fight for equality and his assassination a catalyst to the Civil Rights Movement.

“Tougaloo College is honored to have been gifted the Medgar Evers Home by his widow, Myrlie Evers Williams, and to work with the Evers family to preserve his legacy and immense contributions to our nation. We commend the Department of the Interior for recognizing the Medgar and Myrlie Evers Home first as a National Historic Landmark and now as an addition to the African-American Civil Rights Network,” said Hogan. “It is our hope that the recognition of this symbol of freedom will provide broader exposure for the people of the world to learn more about the life and legacy of Medgar Evers, and in doing do, inspire greater work to advance a more just, humane and inclusive world for all humankind.”

The assassination of Medgar Evers on June 12, 1963, in the carport of his home, was one of the events that led to the passage of the Civil Rights Act of 1964. Both Medgar and Myrlie, his wife, were major contributors to advancing the goals of the civil rights movement on a national level.

Since the 1990s, Tougaloo College in Jackson has operated the Home as a museum. The Home has been on the National Register of Historic Places since 2000. In 2013, the neighborhood was designated as Medgar Ever Historic District. In late 2016, the Medgar and Myrlie Evers Home was designated as a National Historic Landmark.

The African American Civil Rights Network Act of 2017 is a law that requires the Department of the Interior to establish within the National Park Service (NPS) a U.S. Civil Rights Network that encompasses: (1) all NPS units and programs that relate to the African American civil rights movement from 1939 through 1968; (2) with the property owner’s consent, other federal, state, local, and privately owned properties that relate or have a verifiable connection to such movement and that are included in, or eligible for, the National Register of Historic Places; and (3) other governmental and nongovernmental facilities and programs of an educational, research, or interpretive nature that are directly related to such movement.

The video from our Facebook can be viewed here.