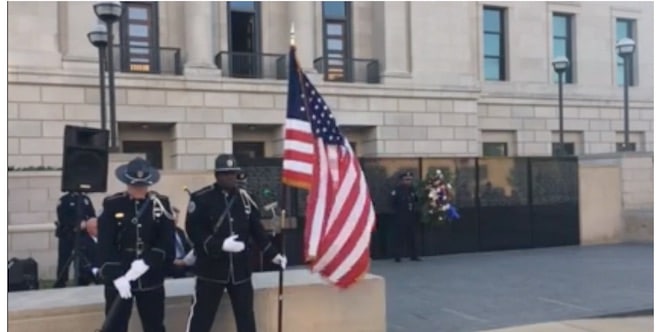 As National Police Week continues, the Federal Bureau of Investigations has published new information on law enforcement deaths in 2016.

Sixty-six members of the law enforcement community were killed in the line of duty in 2016, thirty of those in southern states.

From the FBI report:

Sixty-six law enforcement officers were feloniously killed in the line of duty in 2016. This is an increase of 61 percent when compared with the 41 officers killed in 2015

At the time the 66 law enforcement officers were fatally wounded:

17 were ambushed (entrapment/premeditation);
13 were answering disturbance calls (seven were domestic disturbance calls);
nine were investigating suspicious persons/circumstances;
six were engaged in tactical situations;
five were performing investigative activities;
four were conducting traffic pursuits/stops;
three were investigating drug-related matters;
three were victims of unprovoked attacks;
one was answering a robbery in progress call or pursuing a robbery suspect(s);
one was answering a burglary in progress call or pursuing a burglary suspect(s);
four were attempting other arrests.

Of the 66 officers killed, 50 were confirmed to be wearing body armor at the times of the incidents. Fourteen of the 66 slain officers fired their service weapons, and 10 officers attempted to fire their weapons. Three victim officers had their weapons stolen; one officer was killed with his own weapon.

In 2016, an additional 52 officers were killed in line-of-duty accidents, which are officer deaths that were found not to be willful and intentional. This is an increase of 16 percent when compared with the 45 officers who were accidentally killed in 2015.