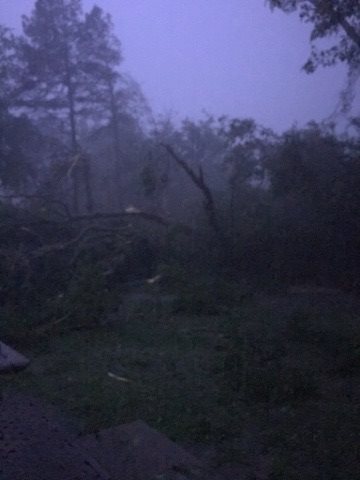 With heavy rains, strong winds and hail, the Magnolia state saw widespread damage in the central portion of the state during Sunday night’s storms.

The majority of the damage in was caused by strong winds and a small amount of hail. Winds were responsible for down trees and power lines. The National Weather Service said there is no confirmation of any tornadoes for the state.

Vicksburg took the first wave of severe weather, as the storm moved in from Louisiana. There were multiple reports of trees down in Warren County and flooding continued to be an issue into the late evening hours.

The National Weather Service said, “don’t drown, turn around,” in an attempt to sway drivers to stay off the roads as the waters rose.

Halls Ferry Road is still underwater and crews are using boats to help get people out of their homes.

Flooding was also reported on I-20 and Highway 468 near the Pearson Road Exit 48. If you see high water on the road, do not drive through it.

The Kroger on I-55 in Jackson was closed as of this morning for flooding in the parking lot. Waters continued to rise onto Ridgewood Road at Hanging Moss Creek near Jackson Academy. The Jackson Police department advised to drive with caution.

Crews responded to the Laurel Park Apartments in Flowood for major flooding, leaving some vehicles half under water.

Strong winds tore through the Gluckstadt area, taking some trees with it.

Several down trees were reported in the Red Oak Subdivision, with minor flooding to homes.

In Canton, WMGO affiliate Jerry Lousteau confirmed several roads had been flooded and some were being evacuated by the Canton Fire Department using boats.

There is flooding on Dinkins Street from Highway 51 west and the south part of Union Street. Mt. Luther King Drive, near the curve is also holding water.

Due to the flooding, the Head Start Center in the area is closed. Red Cross has opened an official shelter at the Mt. Zion Recreational Center on West North Street. The assistance there is not limited to Canton residents.

The Mississippi Department of Transportation also gave a list of their road closures, here’s Morgan Miller with more: