HINDS COUNTY, Miss. – Gay and lesbian couples were denied marriage licenses at the Hinds County Court House Monday morning. The couples were with the Campaign for Southern Equality (CSE), a group who has been traveling across the southern United States applying for marriage licenses, knowing they will get denied, to raise awareness for their cause. Alongside the couples were several others in the community who stood by their side to show support.

“Part of it is just awareness that there are same sex couples, who would like to get married, and who would like those over 1,100 legal rights that do come with marriage,” said Aaron Sorver with the CSE.

“It is not just marriage, its employment laws in Mississippi and every state in the south. You can be fired for being gay. You can be evicted from rental housing. You don’t have parental rights to second parent adoption. Candy and Sabrina, a couple who applied in Gulfport, they had their four kids with them. They don’t have legal rights as parents raising them. If something tragic happens they could be in legal limbo.” 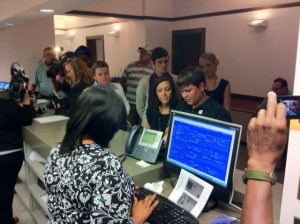 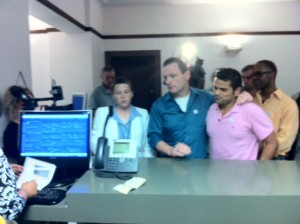 Inside the courthouse Jamie and Kurt were the first to apply for license. Under state law the two men were able to apply, but after turning in their application it was, of course, denied.

After Jaime was handed his denied request, in tears he told the clerk, “We want to be treated like everyone else.”

Jamie said they were going to keep their denied application and frame it, until they could back for another when same sex becomes legal.

The lesbian couple, Chrissy Kelly and Anna Guillot, was also denied. The two were already legally married in New York.

Jamie says they may try to file a lawsuit, but have not decided yet. “If someone doesn’t get denied, then the law will never change to get it approved.”

So far the group has been to Poplarville, Gulfport, Hattiesburg, and Jackson. They plan to visit Tupelo July 18.