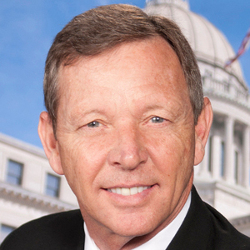 If Formby is confirmed for the three-member commission, he would hand his District 108 House seat over to the state for reassignment. Gov. Bryant would then set a special election to represent the Pearl River County district.

He is a graduate of Mississippi State University, Class of 1979, and has worked for family retail businesses and in real estate. He also served Sen. Trent Lott from 1987 to 1991 in Washington.

His term would start in the middle of next month and end in December 2022.