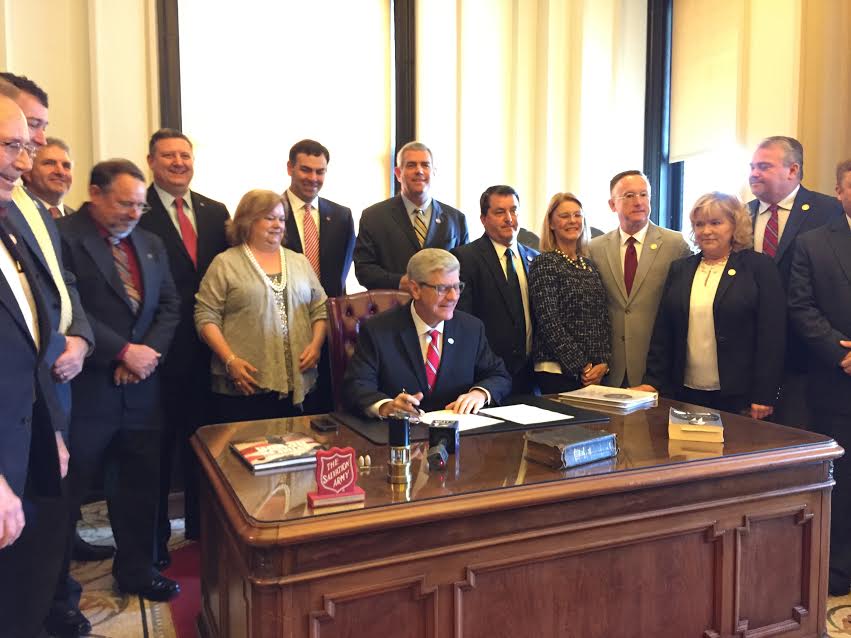 JACKSON- Gov. Bryant joined with other lawmakers like Lt. Gov. Tate Reeves, Rep. Andy Gipson, and author of SB 2710 Senator Sean Tindell at the Capitol on Monday to sign a bill to ban sanctuary city policies in the state.

While Mississippi does not have sanctuary cities, this bill would ban any policies that prevent government agencies, like the police and state universities, from asking about someones immigration status.

“An act to prohibit a state agency, department, political subdivision of this state, county, municipality, university, college, community college or junior college, or any agent, employee or officer thereof from creating, planning, implementing, assisting, participating in, or enabling a sanctuary policy; to provide that any sanctuary policy adopted in violation of this act shall be invalid and void from the date of its adoption or enactment; and for related purposes.”

“The President in his executive order said these sanctuary cities have done imeasurable damage to the republics and the state of Mississippi has already started in a process to identify people who are here illegally,” said Gov. Bryant

Gov. Bryant said for people or organizations like churches who choose to continue to house illegal immigrants, they may answer to God’s law but they must also answer to state law.

“I will let them determine whether or not they want to violate not only federal law but now state law by allowing people who have violated the law intentionally to remain. If that is the type of protection their church wants to afford, I would ask are there no more souls left to be saved in their congregation that this is the position they would like to take,” said Gov. Bryant.

When it comes to universities Gov. Bryant said the last thing that the states needs is for these places to become a sanctuary for people who have violated the law and entered the country illegally. Federal and state lawmakers are now working to identify people who have broken the law to help with what Gov. Bryant calls a very serious issue.

Estimates say there are close to 50,000 illegal immigrants in the state of Mississippi.

Jackson is the only city that has an ordinance on the topic and it does not allow their police officers to ask a persons immigration status. This law will now override that.

Here is the signing live: