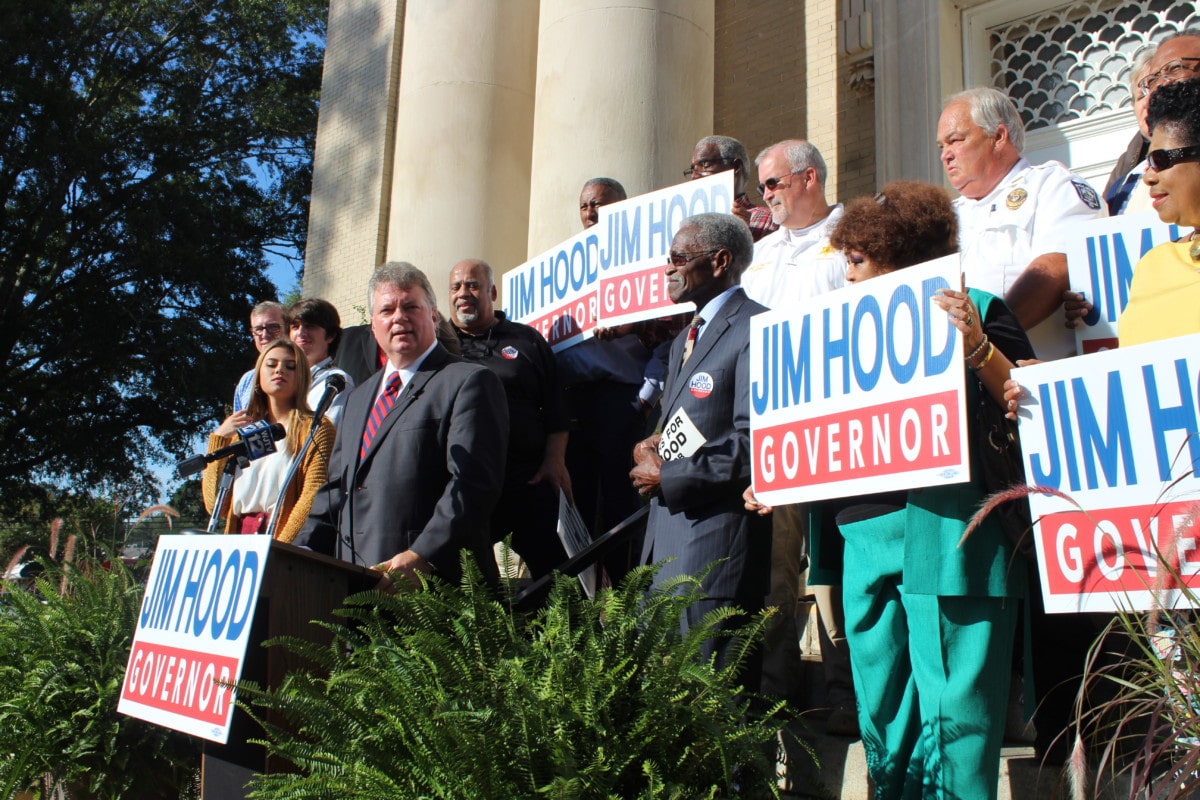 After months of hinting at a run for Governor in 2019, Attorney General Jim Hood has made it official.

Hood made the announcement on the steps of the courthouse in his hometown of Houston after being introduced by his wife, Debbie. As Hood has continued to toy with the notion of a gubernatorial run, it was her permission he sought. She opened the announcement stating that it was in Church on Sunday that she truly came to the realization that this was the right step for her husband and their family.

“I felt convicted about Jim’s continued service to all people in Mississippi,” she said.

Hood then stepped the podium and discussed what he hopes to accomplish throughout the campaign. As for what drove him to his decision, Hood stated that he believes his campaign will have bipartisan support, and he hopes to end the divide between Republicans and Democrats.

“I’m sick of this bickering and fighting,” he said. “These petty, partisan politics are getting us nowhere and we’re not moving forward. I’ve had 100 Republicans and over hundreds of Democrats encourage me to run, simply because, they know what we’re doing right now isn’t working.”

As the AG since 2004, Hood is the only Democrat in Mississippi currently holding a statewide office. Hood mentioned that his values align with both parties and he hopes to see a bipartisan support system.

Hood compared Mississippi’s growth rate to surrounding states and said that it is lagging behind due to policies that lead to young people leaving the state. He went on to say that current legislation allows large out-of-state corporations to take money out of Mississippi and that main street businesses are suffering. President Trump was in Southaven last night and spoke of a booming economy, but Hood sees it differently.

“If they talk to people in business on the coast, it looks good, but business isn’t moving. If you talk about northeast Mississippi, other than the Golden Triangle and maybe DeSoto County, particularly two-lane highway towns like mine, there’s just no growth,” Hood said.

The Attorney General recalled his grandfather practicing medicine in the area when he was younger, and an emergency room that has now closed in Houston. He brought this up to discuss the state of rural health care in the state.

“We’ve had an emergency room out here in Houston my entire life. Now, that ER is closed. To put that in perspective, in 1940, we had better emergency healthcare in rural Mississippi than we have right now. That’s insane,” he exclaimed.

Hood stated that his run is aimed at finding solutions to what he believes to be the issues facing the state.

“There are so many people that tell you what’s wrong and whose fault it is, but not telling you how to fix it,” he said.

As for Hood’s solutions, he once again stated that tax cuts to out-of-state corporations hurt the state and working to improve job training and expanding vo-tech programs across Mississippi must be a priority. Infrastructure also came up, and Hood stated that recent plan passed during the special session was “smoke and mirrors.”

The plan, titled the Mississippi Infrastructure Modernization Act, will bring nearly $200 million to the state’s roads and bridges each year through revenue from a lottery, sports betting,  the internet sales taxes and vehicle user fees.

Speaking to the importance of early childhood development, Hood mentioned that he hopes to establish universal pre-k education across the state.

“It would be the greatest investment that the state of Mississippi has made in our children since the 1982 ‘Education Reform Act’,” Hood said.

In his current role of Attorney General, Hood boasted the success of his office in allowing the collection of the internet sales taxes, the recovery of $3 billion for Mississippi taxpayers, and the increased attention to cybercrime and domestic violence cases.

Hood ended his remarks by saying that he believes this is a chance to set up the next generation of Mississippians with a better future.

“It’s time for Mississippi to pull together, and it’s time for these partisan, petty politics to stop.  It’s time for us to protect our values and to create a future for our kids so that they can stay here and build a Mississippi that works for everyone in Mississippi,” he said.

The 2019 election is a long way away, but Hood stated that he hopes to begin to ramp up fundraising efforts now that he has officially announced his campaign. Lt. Governor Tate Reeves (R) is expected to oppose Hood in the race.