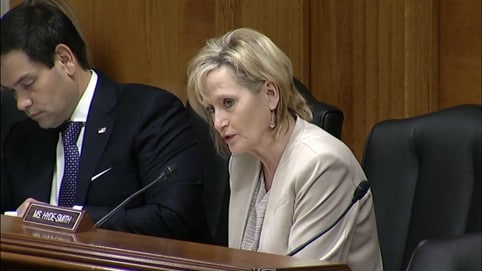 Both the Cutters and the Helicopters are manufactured in Mississippi and Hyde-Smith says they are critical to the U.S. Department of Homeland Securities efforts to secure the nation’s borders and fight illegal activities.

NSCs are built in Pascagoula, while LEH aircraft are manufactured in Columbus.

Hyde-Smith advocated for funding to build a twelfth NSC. No funding was provided for NSC 12 in the FY2019 Consolidated Appropriations Act despite the fact Congress specifically identified the need to recapitalize the aging fleet of 12 High Endurance Cutters with 12 NSC ships.

“National Security Cutters have been the most effective national security assets in protecting the nation’s coasts and waterways from terrorism, human trafficking, drug smuggling, and other maritime threats,” Hyde-Smith said.  “Despite the success of the NSCs, and that the Coast Guard seizes more drugs than all other federal agencies combined, the Coast Guard is still only able to target a fraction of known smuggling events in the SOUTHCOM Theater.”

“I also agree strongly with your comments on the importance of the National Security Cutter and the counter-narcotics mission, and the source and transit zone.  At CBP, our marine patrol aircraft, the referrals that they made, if we didn’t have a cutter on the water, a lot of that would not be indicted.  So could not agree more on their critical role in stopping cocaine headed toward our borders,” McAleenan testified.

Hyde-Smith also sought information from McAleenan on CBP plans to use more than $70 million in FY2018 funding to procure new helicopters and recapitalize its LEH fleet, which has been diminished by aging airframes and accidents.

“The LEH platform is truly the workhorse of the CBP fleet,” Hyde-Smith said.  “Considering the added capability these aircraft will provide to CBP, I think it’s important to move forward with the procurement and recapitalization process.”

McAleenan responded saying he agreed strongly with Hyde-Smith’s comments on the importance of the surveillance of the border.

“I also agree strongly with your comments on how important that is to surveillance at the border and supporting our border patrol agents on the ground and interdicting unlawful activity,” said McAleenan, who described LEH aircraft as “a critical aspect of our aviation surveillance capability.”