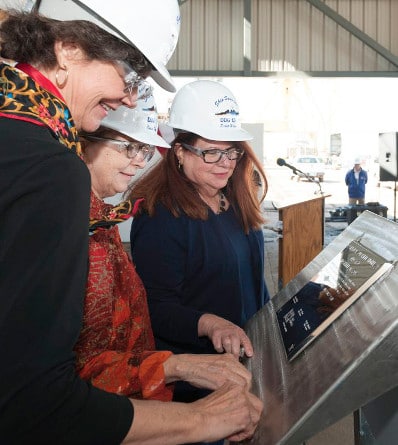 The ship is named in honor of the first woman to receive the Navy Cross.

“It is always exciting to celebrate the keel authentication of another Arleigh Burke-class destroyer,” Ingalls Shipbuilding President Brian Cuccias said during a shipyard ceremony this morning. “The keel authentication is an important milestone in a ship’s life, as we lay the foundation upon which this great ship will be built. Like her namesake, DDG 123 will be strong and capable. Our men and women in the Navy—and Mrs. Higbee’s legacy—deserve nothing less.”

The three women played an important role during former Secretary of the Navy Ray Mabus’ term as governor of Mississippi.

“We want to thank Ingalls Shipbuilding, its employees and its suppliers for the high standards of design and construction and the strong and important support they give their employees and the state of Mississippi,” said Dixon. “We are thrilled and look forward to seeing everyone again at a christening in the very near future.”

C.C. Tanner, a structural welder at Ingalls, welded the three sponsors’ initials onto a steel plate, signifying the keel of DDG 123 as being “truly and fairly laid.” The plate will remain affixed to the ship throughout its lifetime.

“Today marks the true start of this ship’s construction,” said Cmdr. Scott Williams, program manager representative for Supervisor of Shipbuilding Gulf Coast. “With 29 Ingalls-built Arleigh Burke-class destroyers currently in active service and four of her sister ships also in production here at Ingalls, the mere continuity of the Arleigh Burke-class destroyer over the past 25 years shows their importance to our naval forces. To the men and women of Huntington Ingalls Industries who will bring DDG 123 to life, thank you. Thank you to the shipfitters, pipefitters, electricians, welders, testers, and engineers who will toil in this historic shipbuilding journey that will carry a pioneer’s name.”

DDG 123 will be the second ship named for Higbee.

The first was a destroyer commissioned in 1945 and was the first U.S. Navy surface combatant named for a female member of the Navy.

Higbee joined the Navy in October 1908 as part of the newly established Navy Nurse Corps, a group of women who would become known as “The Sacred Twenty,” and became the second superintendent of the Navy Nurse Corps in January 1911.

Arleigh Burke-class destroyers are highly capable, multi-mission ships that can conduct a variety of operations, from peacetime presence and crisis management to sea control and power projection, all in support of the United States’ military strategy.

The MDOC expanding use of behavioral program to inmates