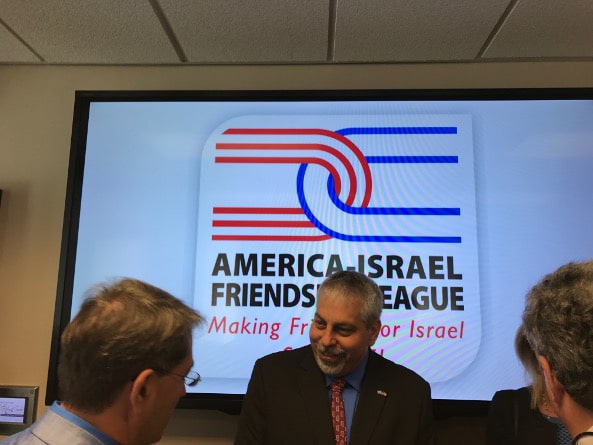 The Consul general of Israel was in Meridian yesterday to celebrate Israel’s 69th Birthday and the strong relationship between the U.S. and Israel.

“Israel, first of all, is really one of the few democracies in the middle east,’ said Greg Snowden, President Pro Tempore of the Mississippi House of Representatives. “They cherish democratic values just like Americans do and they are true allies in a very dangerous part of the world. First and foremost, that is something that we value them for and I think they value the united states for our support. It goes without saying the close ties with the Judeo Christian values the strong Jewish heritage in America and particularly in Meridian.”

Snowden said that Israel and Mississippi have numerous connections.

“Between Israel and Mississippi, we have all sorts of aeronautical affiliations with them, we have businesses here in Mississippi and one that is very close to us here, there is a cosmetic manufacturer just in Kemper County,” said Snowden.

Governor Phil Bryant added that in the last decade Mississippi has exported over 400 million dollars of products manufactured in Mississippi to Israel.

“We think that we can help grow that, we are a very strong defense manufacturer, radar systems that are utilized in Israel now are manufactured in Forrest, Mississippi and we want to make that nation strong,” said Governor Bryant.

Bryant said that he believes in the future, Mississippi will see more Israeli companies bringing their headquarters to America and into Mississippi.

“We are very close in our relationships both on a business standpoint and on from a cultural standpoint. The Christian-Judeo heritage of America goes back to its founding and much of it in Israel, so we are celebrating today. This is the 69th birthday of Israel so it’s a great time for the American and Israeli friendship league to get together to celebrate and to recognize that we have great business opportunities ahead for us and we are going to explore those.”

Lior Haiat, the Consul General of Israel said that he was excited about the for the budding relationship between Israel and Mississippi.

“The potential of the relationship, especially the economic relationship between Israel and Mississippi is huge,” said Lior Haiat, Consul General of Israel. “As the Governor said, there are a lot of sectors of the local economy that really connects to the Israeli economy. The Israeli economy is based on medium and very small companies, startups. They need someone to represent them here. They need partners, American partners. Someone that can take our products and sell them to the American market and I think that Mississippi is perfect for that. That’s why we are trying as a consulate to suggest to Israeli companies, come and see Mississippi, once you are here you will fall in love with Mississippi as I did.”