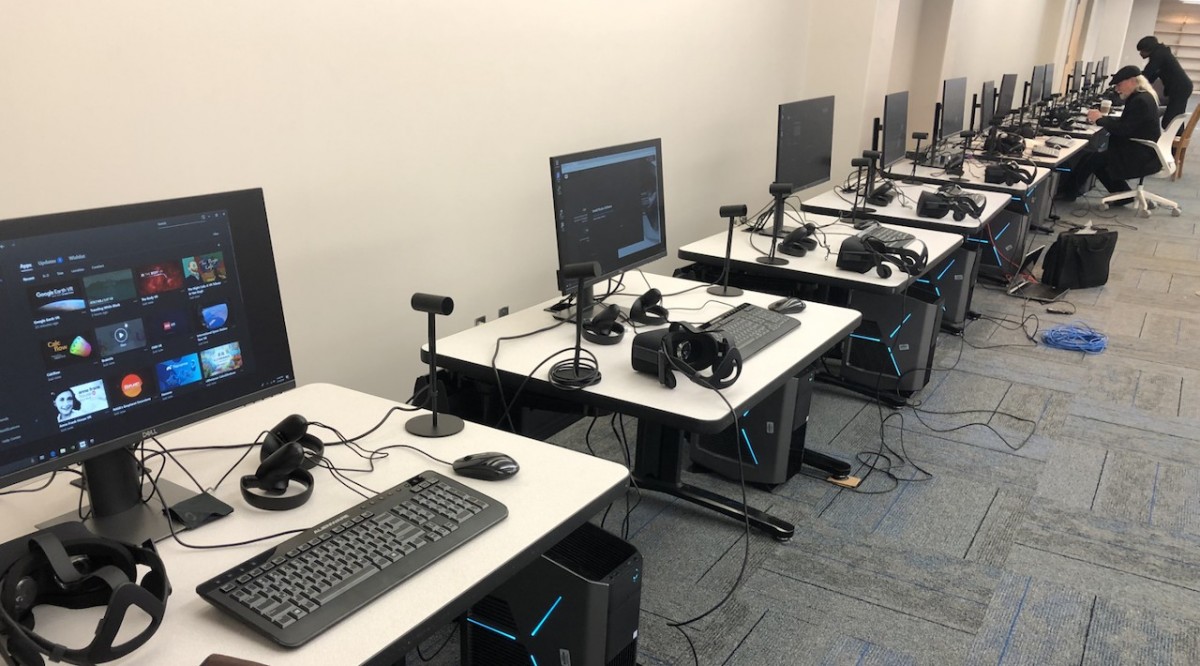 The campus academy, which has 15 stations in the H.P. Jacobs Library, is the first for an institution of higher learning in the Magnolia state and the largest in the South.

“As one considers the pace at which the world is moving and the changing technology, it’s important that we prepare our students and faculty to potentially work in the landscape,” said Dr. Joseph Whittaker, Associate Provost and Vice President for Research and Economic Development.

He said that JSU moved quickly to put the wheels in motion.

“We want them to lead the university rather than playing catch up,” said Whittaker. “With that in mind, we developed this facility so students and faculty can become critical thinkers and do things that 10 years ago we could only imagine. This new academy allows us to assess, test ideas, build prototypes and reimagine what today and the future will look like.”

Dr. Almesha Campbell, director of JSU’s Technology Transfer, Commercialization and Research Communications in the Office of Research and Economic Development, oversees the project.

“We officially installed the virtual reality academy in the new innovation space on the second floor of the H.T. Sampson Library. We have 15 VR stations that we will use to train faculty and students on how to build virtual worlds as well as to immerse themselves into virtual reality.  VR is not new, but now it’s really taking off in the U.S., and we want JSU to be a leader in the area.”

Campbell said she envisions a future of unimaginable growth on many levels.

“For us, it will mean infusing virtual reality into the classroom to provide for a more enhanced learning experience. Also, we will infuse it into innovation technology transfer and commercialization. For example, when students and faculty develop their own virtual reality experiences, an IP (intellectual property) is attached to it so that it can be copyrighted and placed on a platform for other people to purchase. The VR Academy is part of a larger plan to promote innovation, entrepreneurship and economic development at JSU,” she said.

Even with all the advantages that come with VR, Campbell emphasized that their main goal is to ensure that it is infused into the curriculum and will be available throughout the year to ensure that all students are engaged with the technology and better understand the value and capabilities of virtual reality

“When you look at students in gatekeeper courses, in particular, who may be having difficulty passing these courses, we can use virtual reality to immerse them in these lessons, such as Calculus,” said Campbell. “All this will be complemented with the appropriate faculty support and engagement.”

Personally, Campbell has learned to tame her fear of heights. Now, because of her habitual VR experience, acrophobia is almost a thing of the past.

“With VR, we want to help people cope with such fears and learning disabilities,” said Campbell. “We want the possibilities to be endless.”

Vince Jordan is CEO of Lobaki and was contracted to develop JSU’s VR Academy. He commends JSU for becoming the first university in Mississippi to have a VR academy.

“Universities dabble with VR, but what separates JSU is that this is a very focused effort to give young people access and an opportunity to learn how to become virtual-reality and augmented-reality developers,” said Jordan.

Jordan added that the setup in JSU’s Innovation Center is geared toward helping the university community take advantage of this industry that is starting to explode.

“JSU is not playing catch up,” said Jordan. “It’s really in a leadership role. Faculty, staff, and students will be able to explore different applications that show what you can do in virtual reality. They can start thinking about what they might want to do in any particular discipline and field of interest, as well as create a business.”

Anthony Gomes, a JSU graduate student in computer science from Bangladesh, is experimenting with various applications. He is the JSU Innovation Center’s first Innovation Fellow who will train to become a VR curator and teach others. (Photo by L.A. Warren/JSU)

Along with that, a variety of experiences have been placed on all the systems. Now, faculty and students can travel around the world, tour the International Space Station or the Anne Frank House in Holland.

Another VR event is a history experience titled “I Am A Man.” It’s an “emotional, heart-thumping” experience that places individuals at the 1968 sanitation protest in Memphis and at Dr. Martin Luther King Jr.’s assassination. Other experiences will be placed on the machines, depending on the needs of students and faculty

Meanwhile, Campbell said between now and the summer, JSU will start its “train-the-trainer program” geared toward preparing students and faculty to teach others about VR in their specific disciplines.

“We don’t want just 10 people to know how to use VR. Rather, we want the entire campus to learn,” said Campbell. “This is the key to sustainability. Starting in the fall, we would  like some aspects of VR to be part of JSU’s curriculum.”

Generally, Campbell said when people talk about technology they instantly think of STEM. However, she reminds everyone that VR can be infused in journalism, health and any other disciplines. “I have already started initial conversations with different program directors at JSU about infusing VR in their programs, such as art, history, journalism, public health, and the sciences. We want professors to bring their classes to the VR Academy, so they can experience the power of VR and to come up with ideas for infusing VR in the curriculum.”

Equally enthusiastic, Whittaker said he sees the potential for JSU to independently sustain itself and change the trajectory of people’s lives.

“HBCUs, in general, have been under-resourced,” Whittaker said. “We must find creative ways to position ourselves, stay ahead of the game and still remain current despite these challenges. We are able to level the playing fields in some respects by allowing students to demonstrate that they can create and become innovative.”

Borkey Show: What we learned from the Ole Miss spring game