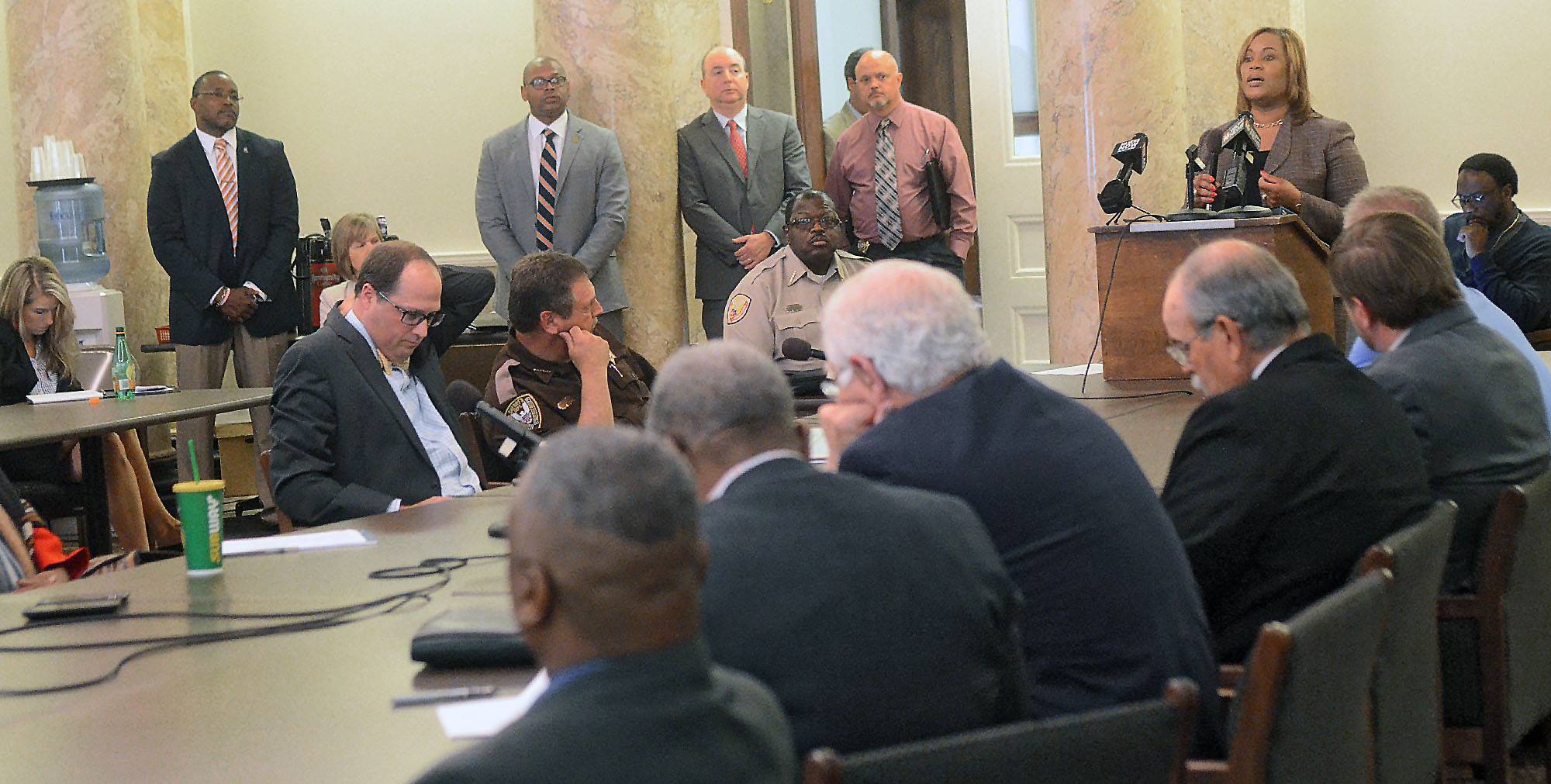 Corrections Commissioner Pelicia E. Hall answered numerous questions for about two hours from sheriffs and lawmakers about the department’s decision to remove 400 inmates from regional jails and return them to state prisons because the department doesn’t have the money to pay the counties more.

During the hearing at the State Capitol called by the sheriffs of the 15 regional facilities, Hall reiterated that the department values its relationship with the counties, but the department simply does not have the funds in its current budget to pay regionals for housing the additional inmates.

“The Department of Corrections doesn’t get to say where the funding comes from, but I do get to tell you what our needs are and that is what I did,” Commissioner Hall said at the hearing in response to remarks from Sen. Barbara Blackmon, who said she thought all the deficits had been funded. “And the consideration was given toward particular programs.”

Commissioner Hall had informed lawmakers by letters and in previous hearings in the 2018 legislative session that the department has a $3.6 million deficit in the regional program, $9 million in medical and about $7 million in the private prison program. Only the private prison and medical deficits were funded.

In the past, Hall has said that she informed officials of their needs.

“I informed lawmakers in writing and at several committee hearings that the agency needed deficit appropriations for four areas: Medical, private prisons, regionals and local confinement combined for a total deficit of nearly $20 million this year,” Commissioner Pelicia E. Hall said. “We took measures to erase the shortage in local confinement and communicated that. However, budget appropriations addressed deficits in private and medical only.”

Hall said that linking the reopening of the Delta Correctional Facility in Greenwood to the regional program is deceptive, considering how transparent MDOC has been about the reason for using the facility.

“Delta is housing offenders not classified for regionals, and MDOC is operating this facility, not a private contractor, using money from the consolidation of four facilities,” said Hall. “So why bring up Delta?”

Letters have already been sent to all sheriffs housing inmates above the contractual level to notify them of MDOC‘s decision.
MDOC has agreements with all regional facilities to house MDOC inmate populations above the required minimum at $20 per day versus the rate of $29.74 per day.

The department has been housing additional inmates at the regionals because of the closure of some SMCI units resulting from lack of staffing/officer safety concerns. However, the department has no choice but to maximize the use of existing staff to securely house those returning offenders. Delivery of programming will be hampered because of the lack of additional staff to perform those functions.

“One sheriff explicitly told MDOC to come get the inmates if the agency could not pay the full per diem of $29.74 for all inmates housed at his facility, “ Commissioner Hall said. “MDOC is now doing that, and the sheriff is now complaining.”