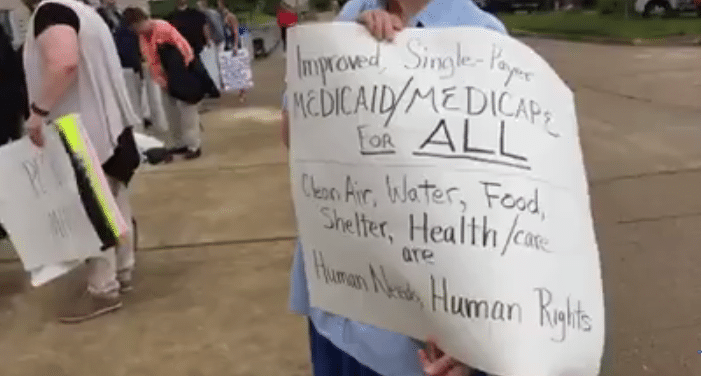 Over 50 people crowded the sidewalks throughout Jackson in protest of Medicaid cuts Thursday morning. Some met in front of Senator Thad Cochran’s Jackson office, and others in front of the federal court house.

The crowd was intent on expressing their views on a new healthcare bill currently being reviewed by Congress.

The media was shut out of a meeting between citizens and the senator’s office, but when News Mississippi called about the protest, Senator Cochran’s office replied with a statement:

“This is a work in progress. I will continue to work with my colleagues to reach an agreement that benefits the nation.”

The protest in front of the federal court house brought multiple political parties and organizations together.

The Green Party joined the protest, saying that it shouldn’t stop at healthcare:

Dr. Scott Crawford of the Life Mississippi organization, spoke with News Mississippi regarding the impacts the healthcare reform bill in the senate could have on those with disabilities.

“There are many who couldn’t be in community based programs, they’d have to go to a nursing home,” said Crawford. “We’re one of the only countries without universal healthcare. Shame on us. We can do better.”

Crawford was once a psychiatrist before being diagnosed with a severe progressive form of multiple sclerosis. He says in order to function each day, he must sleep in excess of 12 hours during the day, and that to even eat takes so much energy that he is unable to move about afterwards. The disease has struck his vocal chords, and he cannot speak above a whisper. Since then, he has been an advocate for Life Mississippi.

The vote on healthcare reform has been postponed in the Senate until after the 4th of July recess. News Mississippi will continue to follow this story.

Courtney Carter and Jared Bounds contributed to this story.