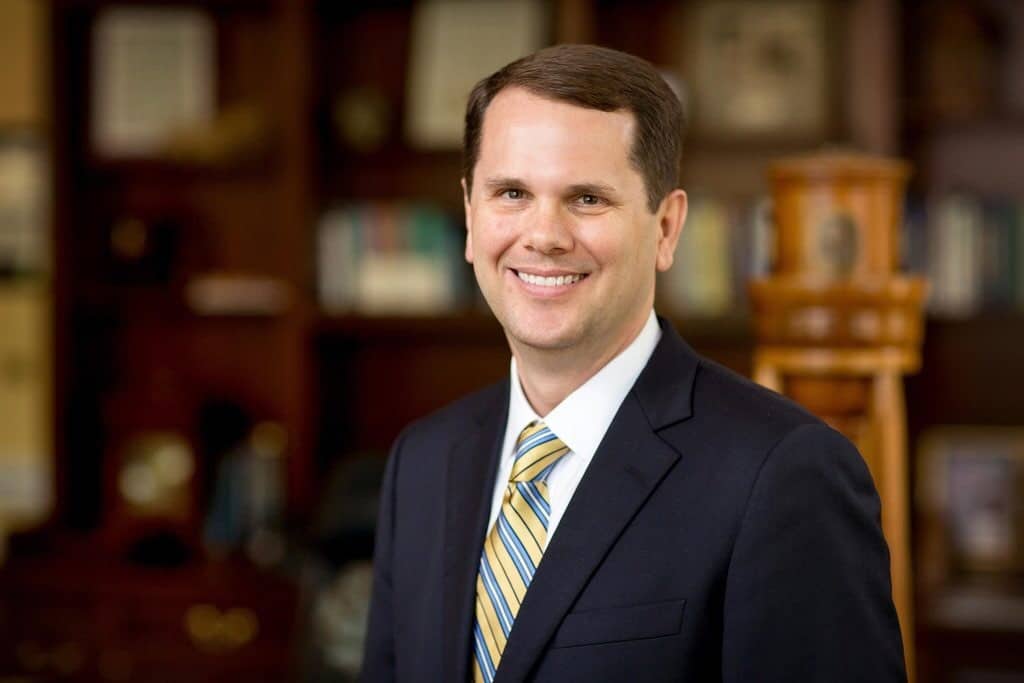 This promises to be a Mississippi homecoming for Thompson. He and his wife, Jana, are natives of the small Alcorn County community of Rienzi in North Mississippi. The Thompsons are both graduates of the University of Mississippi School of Pharmacy. Dr. Thompson earned his doctorate in pharmaceutical sciences at Ole Miss in 2002. He earned his bachelor’s in that field on the Oxford campus in 1997.

First joining the Ohio State administrative team in 2009 and having served as a member of the OSU President’s Cabinet, President-elect Thompson should build on the notable accomplishments of the Royce Era, MC leaders say. Over the past 16 years, MC enrollment climbed, Royce strengthened school finances, orchestrated a facilities renaissance, and added stellar new programs. He enhanced the Christian university’s national reputation on the Clinton campus and at MC Law in Jackson.

At 60,000-student Ohio State, Dr. Thompson held prominent positions in one of the country’s largest universities. He led OSU’s Science and Technology Campus and held a joint appointment at Battelle, the world’s premier non-profit research and development organization. He has also worked in Washington as a senior staffer to the U.S. Senate Appropriations Committee and recently retired Sen. Thad Cochran. During Thompson’s time in DC, Sen. Cochran chaired the influential Appropriations and Agriculture Committees.

MC trustees considered a pool of higher education leaders across the nation after President Royce announced his retirement in August 2017. But Dr. Thompson’s name kept rising to the top.

“We are so excited to begin a new era at Mississippi College under the leadership of Dr. Blake Thompson,” said Bill Sones, a Brookhaven banker who chaired the presidential search committee. “It has been a real pleasure to get to know the Thompsons and now to welcome them back home to Mississippi.”

The Thompsons are the parents of three children and are deeply involved in the Columbus community. Blake currently serves as president of Our Ohio Renewal, a non-profit dedicated to addressing social challenges facing Ohio families. The 43-year-old Mississippi native is active in several campus ministries, including a new institute focused on supporting faculty as they seek to integrate their faith and profession.

U.S. Congressman Gregg Harper is a 1978 graduate of Mississippi College and congratulated Dr. Thompson on his new position.

“This is a superior selection by Mississippi College,” Harper said. “Dr. Thompson is a dedicated family man who loves the Lord and has a heart for higher education. I wish Dr. Thompson and his family the very best in this exciting new  chapter of their lives.”

“His youthful devotion and passion for the mission of Mississippi College promises great days ahead for this university cherished by so many,” Dr. Royce said.

Dr. Thompson is elated at the opportunity to return to his native Mississippi and build upon Dr. Royce’s many accomplishments at America’s second oldest Baptist college.

“It will be a great honor and privilege to lead Mississippi College as its 20th president,” Thompson said.

“Jana and I grew up and were educated here, and we developed our core values here in Mississippi.  We then pursued professional opportunities in some of the most vibrant places in the country, but we always sensed that we wanted to come home. I am thankful the chance to do that presented itself as MC’s president,” Thompson said. “God has richly blessed our family on our journey, and we believe He will continue to bless us and the entire Mississippi College family for years to come as we take this important next step.”

People quite familiar with his performance on the Columbus campus include Ohio State trustee Clark Kellogg. “I’ve had the pleasure of getting to know Blake as a man and as our board secretary at The Ohio State University over the last few years,” said the former NBA and Ohio State basketball star. “His character, competence, communication skills, and faith have impressed me greatly. He is a consensus builder and thoughtful leader who will serve Mississippi College well.”

Kellogg is a college basketball analyst for CBS Sports who was a keynote speaker at the MC sports dinner a couple of years ago.

Thompson, who also earned an executive master’s degree at the Georgetown University School of Business in 2007, will be a major asset at MC, said Roy Ward, who chairs the university’s Board of Trustees. “Dr. Thompson’s commitment to excellence in all his endeavors, his visionary thinking, and Christian faith have prepared him to build on the firm foundation established at Mississippi College.”

“Blake Thompson brings a rare combination of skills and experiences,” says Mississippi businessman Leland Speed, chair of MC’s Foundation Board and a member of the presidential search committee. “That matches with the needs of higher education today.”