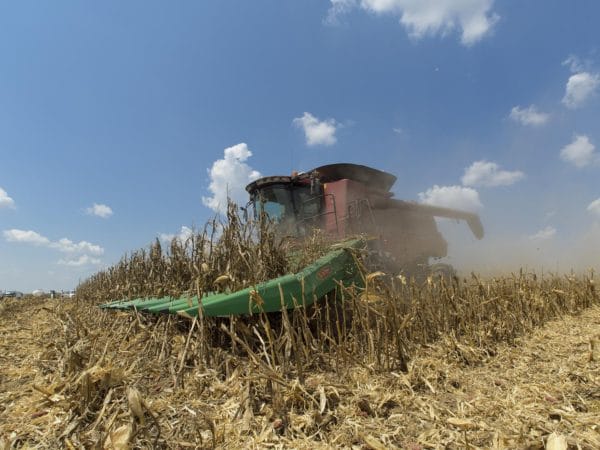 STARKVILLE, Miss. — Mississippi producers are optimistic that the remnants of Hurricane Harvey that moved through the state in late August were not enough to stop corn harvests from reaching a new record.

As of Aug. 27, the U.S. Department of Agriculture estimated 51 percent of the corn crop was harvested. Growers had a few more days to tackle remaining acres before rains came through the state. USDA estimated that 78 percent of the crop was in good or excellent shape.

“Even though corn acreage is down over 25 percent from recent years, the yields are much higher than normal,” Larson said. “Based on the reports I’m getting and the MSU plots we’re harvesting, the yields are well above anything we’ve ever harvested before.”

Larson said the yields are the result of a better planting season than normal, followed by relatively dry conditions in April and May that allowed the roots to become well established. Cool nights in June benefitted pollination, as did frequent rains that coincided with the crop’s highest water usage.

Larson said growers in the Delta had the majority of their corn harvested before the hurricane system moved through.

Alex Deason, Extension agent in Sunflower County, said most of the county’s corn crop was harvested by the end of August.

“We’re having a bumper crop, and producers have been real pleased with yields,” Deason said. “It’s been hard to differentiate between dryland and irrigated corn.”

Deason said some producers used minimal irrigation, while others never had to turn the water on.

Hurricane Harvey brought heavy rains to the north Delta and along the Tennessee line. Much of the corn left in the field is in that area, making it vulnerable to wet conditions and wind.

Charlie Stokes, Extension agent in Monroe County, said corn harvest was not as far along as it was in the Delta because it got a slower start.

“Because we’re farther north, we’re the last place in the state to get planted,” Stokes said. “We didn’t get started on harvest until about Aug. 21 because growers were letting it dry in the field until it reached 15 percent moisture.”

The bumper yields will help offset corn prices, which are down just slightly from a year ago.

Yields across the Corn Belt have varied widely, and the state’s high yields have not affected prices.

“Mississippi’s production isn’t large enough to move the markets more than a penny or two on a national scale, but one thing we could see is changes in our local basis,” Williams said. “As our local supply of corn increases, that could weaken prices at the local grain elevator, but even then, it likely won’t be by more than a few cents per bushel.”