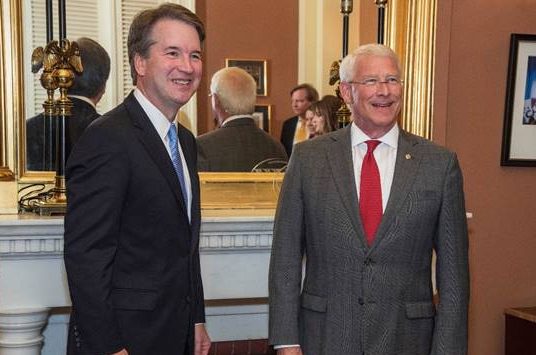 As the process continues to confirm Brett Kavanaugh to the Supreme Court, Mississippi’s Republican Leadership continues to back the President’s Nominee. On Friday The Senate Judiciary committee did vote to recommend Kavanaugh for a full floor vote, however, that vote will take place after a week-long FBI investigation into the sexual allegations made against Kavanaugh.

“It’s just a matter of getting up enough votes for confirmation,” said U.S. Senator Roger Wicker. “We didn’t have the votes Friday and we had the possibility of getting the Alaska and Maine Senators, as well as, Jeff Flake if we do the FBI investigation.”

However, Senator Wicker said the outcome of the investigation will be the same as before.

Wicker added that there is a fear the investigation and the confirmation process will be dragged out further, however, they must still walk through the process. Governor Phil Bryant said the Democrats are challenging the basic concepts of the rule of law, saying that the country depends on the rule of law.

Bryant added that there is a precedent being set during the confirmation hearings that keeps getting worse.

“The Democrats realize that Judge Kavanaugh will be the vote, a turning point in many of the liberal standards that they have allowed the courts over the years to legislate,” Bryant said. “I remember Judge Scalia talking about how the courts have become legislators and that’s why they seem like political figures, so now they are taking a political approach to Judge Kavanaugh. It is changing the way we go about having a job interview.”