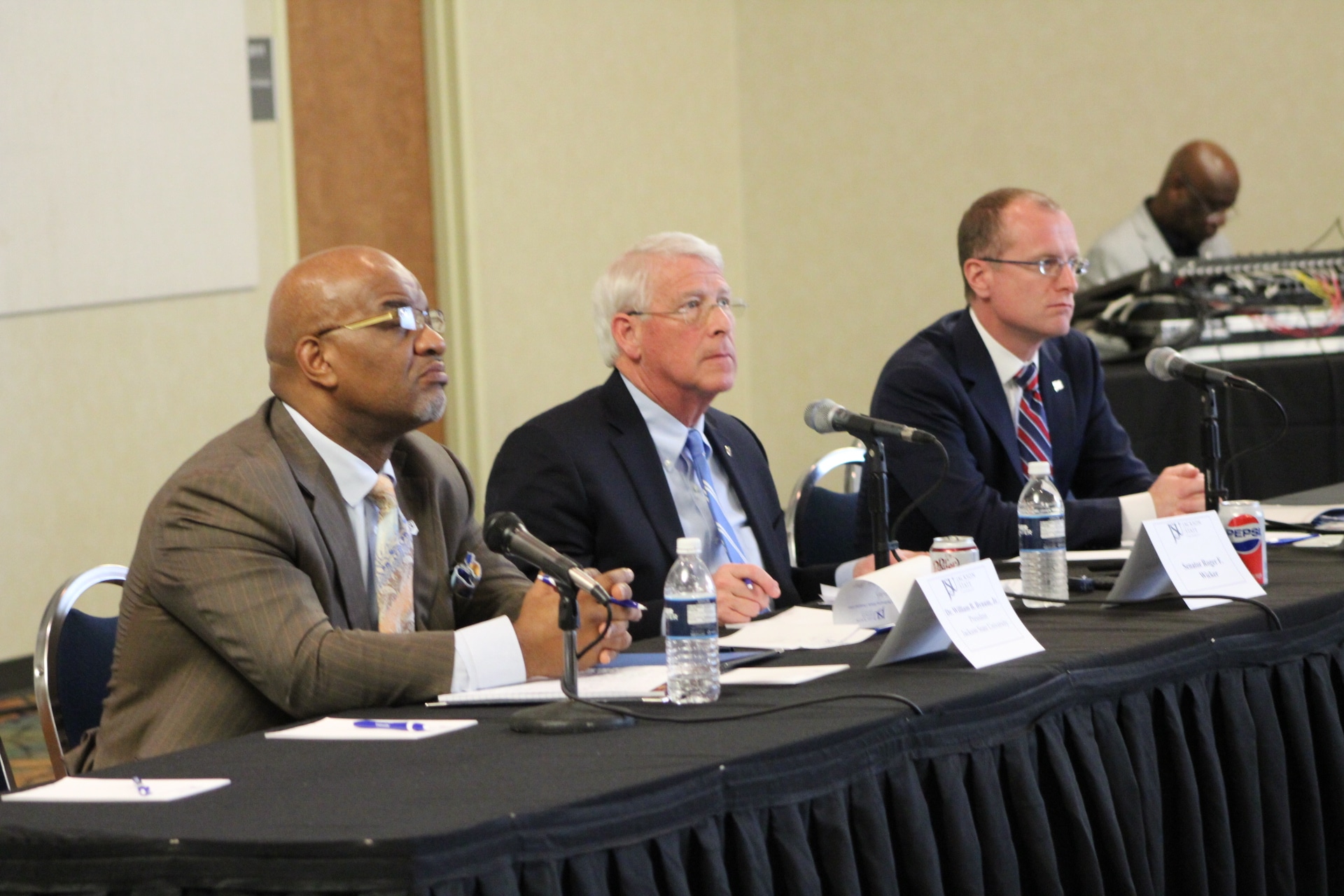 Earlier this week, leaders from Mississippi’s growing technology sector met at Jackson State for a roundtable discussion hosted by Senator Roger Wicker. The discussion was facilitated by Wicker and FCC commissioner Brenden Carr, who was visiting to observe the growth efforts in the state.

Represented at the table were those from the private sector and education systems across the state, and the majority of the conversation centered around filling open jobs in Mississippi by increasing the level of tech education for students.

Several members of the discussion mentioned thousands of job openings in the state awaiting applicants with the proper knowledge and training. Richard Sun with Innovate Mississippi, says that the jobs have the potential to become a true career for young Mississippians.

“There’s a lot of unrealized potential in our young people,” Sun said. “With a base camp and MS coding academies, we may have found a way to supplement what’s being done in the education system, so that in 11 months we can take people from minimum wage jobs to a career in tech starting at $50,000. Once those people are mature coders, those jobs could pay $75,000-100,000.”

Currently, over 1,100 jobs remain unfilled in Mississippi, just in the coding side of tech, and nearly 500,000 exist across the country. Sun says that if Mississippi can continue to improve, more jobs will be filled and created in the state. He went on to say that working together is truly the best way to reach the goal of advancing Mississippi’s tech future.

“There’s a lot of people working in creative ways to help Mississippi assume a stronger, better leadership role in tech. There’s a lot of different ways to get to the variety of different endpoints that we want to see,” Sun said. “We are working with junior colleges, the community college board, the MDA and all of that helps our initiative become stronger, and that’s an example of how creative partnerships can get things further along than individuals would be able to.”

Carr was encouraged by what he heard throughout the conversation when it came to job growth and creating opportunity in Mississippi.

“There’s a tremendous opportunity to get the right tech and telecommunication policies in place to help create jobs. I’m really optimistic that the pieces are being put in place to help make sure that Mississippi can compete and Mississippians can participate in this new economy that is out there,” Carr said.

Another portion of the conversation focused on increasing broadband to rural areas. Concerns were raised over the level of resources available to help entrepreneurs grow tech start-ups in these areas. Wicker and Carr both spoke of efforts to improve that access through technological developments and proposed legislation to cut regulations that prohibit development.

“Closing the digital divide and getting broadband to rural areas is a challenge, but the FCC is doing a couple of things. One, we have a $10 billion fund that we are increasingly focusing on deployments in rural America. Two, this permitting process needs fundamental reforms. It costs too much and takes too long from a permitting standpoint to deploy broadband; that’s holding some communities back and we’re going to take action there as well.”

Carr said that the development of new technology could also bring the price of deploying broadband down in rural areas.

As for the host of discussion, JSU President Dr. William Bynum Jr. says that Jackson State can become a leader for the next generation’s advancement in tech fields.

“We can play a huge role,” Dr. Bynum said. “One of the things that most people don’t know about JSU is that our college of Science, Engineering and Technology is one of our largest schools with almost 2,000 majoring students. The capabilities are simply outstanding thanks to our new facilities here. Not only do we have the opportunities for the science and theory that happens in the classroom, but we also have outstanding labs where students are able to put what they learned into practice.”

Overall, Wicker was encouraged by what he heard and the discussion that was had as important steps continue to be taken in the advancement of Mississippi’s tech future.

“We’ve seen some opportunities and room for improvement,” Wicker said. “I am encouraged by what I’ve learned today about all of the things going on and a foundation that we can build on.”

Apprenticeship programs and internships were also touched on as important ways for students to begin receiving the type of training that will benefit them in their careers and give them a leg up on the competition.