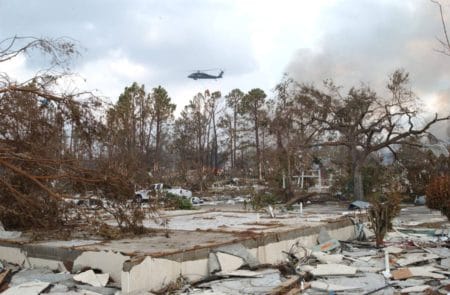 The Mississippi Gulf Coast was devastated 13 years ago when a Catagory 3 storm made landfall in Mississippi and Louisiana.

The storm was upgraded to a Category 5 Storm with winds reaching upwards of 135 mph. Katrina claimed 238 Missippians’ lives and caused more than $241 billion dollars in damages.

However, Mississippians are a resilient people. The Magnolia state, though changed forever by that fateful day, has moved past the tragedies they faced all while vowing to never forget.

“We saw the absolute worst of Mother Nature, and the absolute best of humanity,” Gulfport Mayor Billy Hewes told News Mississippi. “I think it’s something people will always reflect back on, and they’ll use it as a measuring stick.”

#HurricaneKatrina ripped through the Mississippi Gulf Coast 13 years ago to this day. Following the devastation, @MississippiDOT played a vital role in rebuilding the Gulf Coast and restoring mobility. Here’s a time-lapse video of the construction of the new Biloxi Bay Bridge. pic.twitter.com/U5j8FlFiyb

“Thirteen years ago today, Katrina knocked us down, but not out,” said Governor Phil Bryant. “Coast residents are strong and proud people who have rebuilt bigger and better than ever. Thanks to everyone who helped us recover.”

Fixing Your Food Plots on @TheJTShow