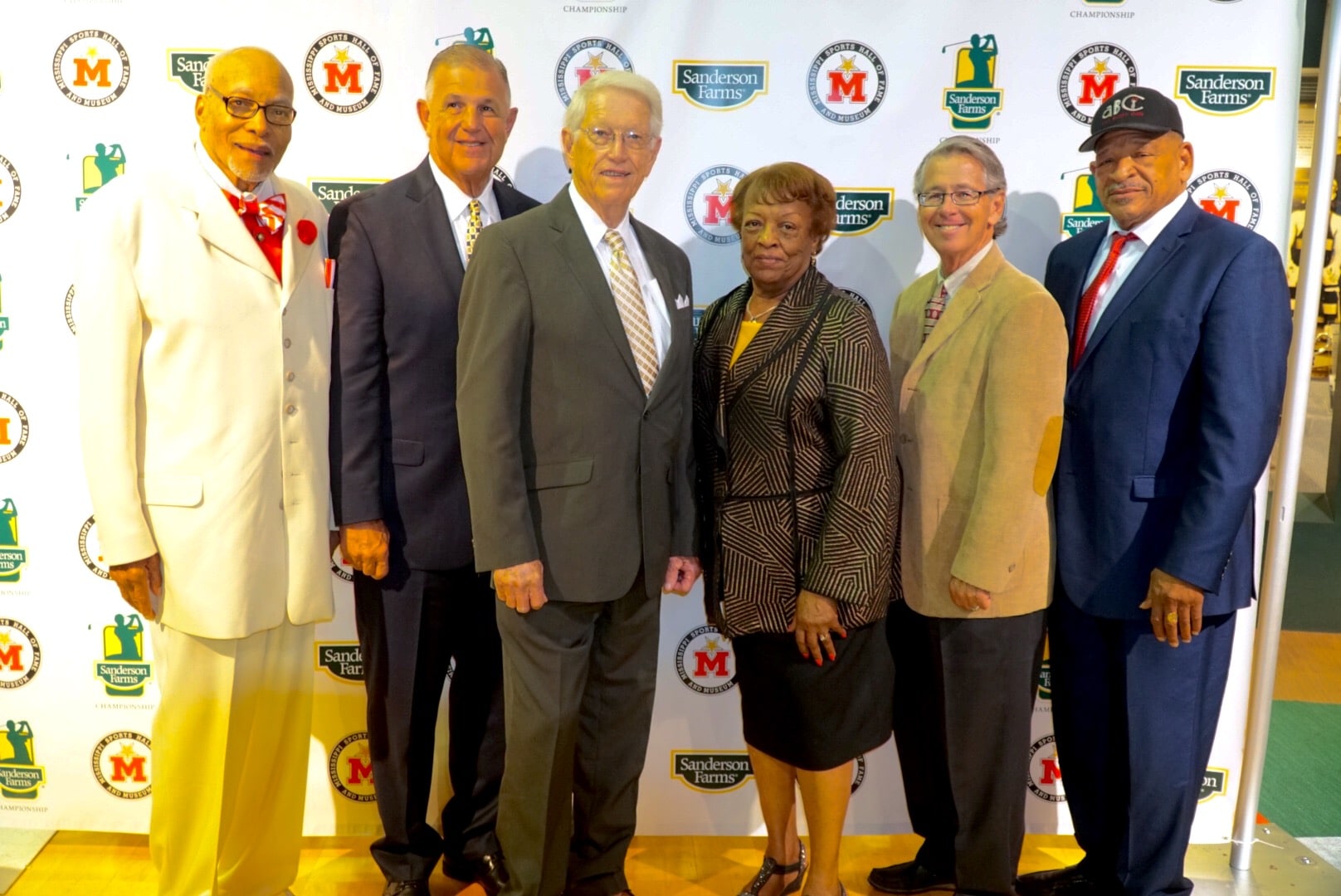 The 2018 class of the Mississippi Sports Hall of Fame has been announced and consists of Billy Brewer, Joe Walker Jr. Anna Jackson, Mike Jones, Layfayette Stribling and Archie Moore.

The class is headlined by some of the finest coaches to work in the state of Mississippi, and Hall of Fame Executive Director Bill Blackwell stated in a release that this class developed a bit of a theme.

“Coaching is the theme of this year’s class,” according to Blackwell. “We have a track coach, three basketball coaches, a football coach and a World Champion boxer who mentored youth after his retirement.”

Boxing legend Archie Moore will be inducted posthumously after passing away in 1998.

Each inductee has left their mark on the Magnolia state with a laundry list of accomplishments which have been outlined by the Hall of Fame in their release.

Anna Jackson:  This Kosciusko native was the women’s basketball coach at Murrah High School here in Jackson beginning back in 1983.  She coached the Lady Mustangs to a record nine Class 5A championships, one Big Eight Title, eight Division crowns, three South State titles, three North State titles, and one Grand Slam title.  Her record of 692 – 167 gives her a winning percentage of 80%.  Twice her teams won three titles in a row.  She is the first Mississippi Coach to be named Clarion-Ledger All-State Coach of the Year three times, she was selected as WBCA All American Coach in 1999-2000 and McDonald’s All American Coach in 2004-2005.  USA Today named her the Most Caring Coach in America in 1998.  Ms. Jackson also has coached in many all-star games during her career.

Layfayette Stribling:  Coach Strib coached basketball for 55 years at both the high school and collegiate levels.  At South Leake High School his boy’s teams won a state championship, and the girls added two more.  His boy’s teams recorded a record of 741 – 171 and never had a losing season.  He gained national attention while at Mississippi Valley State University.  His teams won four SWAC Championships, three SWAC Tournament Championships and earned three NCAA tournament bids.  He retired from Valley for just a short time before Tougaloo called and asked him to guide their program.  There his team won four GCAC titles, one GCAC tournament and appeared five times in the National NAIA Tournament.  He is a member of the Mississippi Association of Coaches Hall of Fame, the SWAC Hall of Fame and the Mississippi Valley State Hall of Fame.

Mike Jones:  Coach Mike Jones is now in his 15th year as the Athletic Director at Mississippi College in Clinton.  In twenty years as a head basketball coach, he compiled a 436 – 130 record.  He coached 16 years at MC and four years at Co-Lin following eight years as an assistant coach at the University of Southern Mississippi.  He led MC to one Gulf South Conference Championship and four American Southwest Conference Championships.  His team also reached the NCAA Division III “Sweet 16” three different times.  A native of New Hebron, MS, he moved MC Athletics back to NCAA Division II status and back into the Gulf South Conference as Athletics Director.  He was a three-time ASC Coach of the Year, two-time Junior College Coach of the Year and named to the Co-Lin Hall of Fame.

Billy Brewer:  Columbus, MS native Billy Brewer earned accolades as both a football player and as a coach.  He played quarterback, defensive back, punted and held for place kicks on Ole Miss teams from 1957 – 1960.  He earned All-SEC status as a defensive back during that time.  He was named to the Ole Miss Team of the Century in 1993.  Brewer played in the NFL for the Washington Redskins in 1960 and in the Canadian Football League for the British Columbia Lions in 1961.  He began his coaching career at his alma mater Stephen D. Lee High School in 1963.  He left the high school ranks after the 1970 season with an overall record of 70-17-2.  Following two seasons as a college assistant coach, he became the Head Coach at Southeastern Louisiana University where he had a 38-24-2 record. He moved to Louisiana Tech in 1980 where he went 19-15-1.  In 1983, he returned to Oxford to lead the Rebels for eleven seasons, compiling a 67-56-3 record while at the helm of Ole Miss.  Four times he was named SEC Coach of the Year and led the Rebels to five bowl appearances.

Joe Walker, Jr.:  Born in Oxford, Mississippi Joe Walker Jr. is a top track and field coach.  As an athlete, he played both basketball and track.  He attended Ole Miss and played freshman basketball before transferring to Mississippi College and lettering in cross country, track, and basketball.  He began his coaching career at Meridian High School before moving into the collegiate ranks at Mississippi College.  At MC, he took the Choctaws to three Gulf South Conference titles.  While he was at MC, Larry Myricks won NCAA I, NCAA II and AAU titles in Long Jump.  He also coached Joe Boyles to an NCAA Division II Steeplechase Championship.  Walker has also coached at Ole Miss, Florida and Louisville.  At Ole Miss, he led the Rebels to eleven top 20 finishes.  His teams earned All American designations one hundred twenty-four times.  Gulfport’s Brittney Reese, a three-time Olympian is another of Walker’s athletes.  He is a member of the Mississippi College Athletic Hall of Fame and the Ole Miss Athletics Hall of Fame.

Archie Moore:  A professional boxer and the longest reigning World Light Heavyweight Champion of all time.  Moore held the Light Heavyweight title from December of 1952 until May of 1962.  Nicknamed “The Mongoose” he had one of the longest careers in boxing history. Moore recorded the most knockouts (132) in boxing history and moved up in class to get shots at the Heavyweight Title.  He is the only athlete to fight both Rocky Marciano and Cassius Clay (Muhammad Ali).  Born in Benoit, MS in 1913 as Archibald Lee Wright, he moved to St. Louis to live with an Uncle and Aunt when his father abandoned the family.  He adopted the Uncle’s last name simply because it was easier than explaining the situation.  Young Moore started boxing professionally in 1935.  By 1946 he had moved to the Light Heavyweight division and fought Ezzard Charles for the title but was defeated by the future Heavyweight champ.  At 36 years of age, Moore fought the IBHOF honoree, Joey Maxim and in a fifteen-round decision won the Light Heavyweight crown.  On September 21, 1955, Moore faced Marciano in Madison Square Garden for the Heavyweight title.  In round two he knocked the champ to the canvas, and it appeared he had a chance to win the fight, but the referee continued the count giving Marciano a chance to recover.  Marciano won the decision.  In 1956 Moore again had a title shot against Floyd Patterson, but he lost by knockout.  In 1962 Moore was stripped of his Light Heavyweight title but continued to fight as a Heavyweight.  He faced Ali, whom he had trained briefly in one of his last fights and lost by a knockout.  His career lasted through four decades before retiring and appearing in many television shows and movies.  He started and ran the ABC Youth Foundation in San Diego, California which helps at-risk youngsters learn responsibility and work ethic.  His son, Billy Moore stills runs the foundation today.

Tellis expected to remain in Mississippi