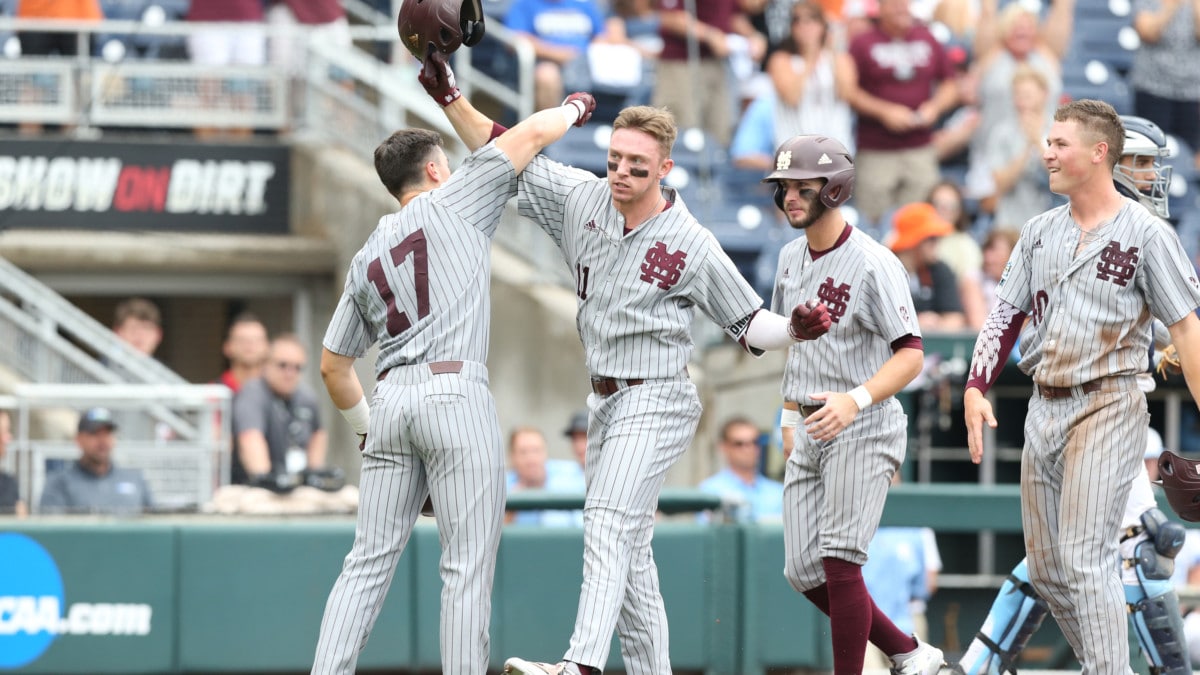 On Saturday, Mississippi State scored one run to take down Washington, but today, the offense was rolling as they overpowered UNC by a 12-2 final.

The Bulldogs and the Tar Heels were set to play on Monday night, but rain forced the game to be postponed until this morning. Once play was underway, MSU didn’t waste much time as they swung the momentum heavily in their favor in the top of the 2nd inning.

UNC would take a 1-0 lead in the 1st inning, but their lead was short-lived. The creator of the ‘rally banana’, Jordan Westburg, stepped to the plate with the bases loaded, and with a 1-2 count, he drove a hanging breaking ball over the left field wall for a grand slam.

Mid 2 | Jordan Westburg uses the power of potassium to give us a 4-1 lead!!#OmaDawgs | #HailState? pic.twitter.com/RjvjIWvAay

Konnor Pilkington got the start for State and with a 4-1 lead, he settled in and pitched a gem. In the 4th inning, UNC would put runners on 2nd and 3rd, but Pilkington was able to get out of trouble without a run scoring. The lefty remained in the game until the 7th after allowing a leadoff triple.

Cole Gordon entered with the runner on 3rd and a wild pitch cut the Bulldog lead to 4-2, but once again, the Bulldogs would respond. A marathon of an 8th inning saw MSU score 8 runs on 6 hits, and they would bat around. Dustin Skelton got things going with a single, and the Bulldogs would eventually load the bases. Three singles would do most of the damage as MSU put some distance between themselves and the Tar Heels. When Westburg came up, he delivered once again with a 3-RBI double to stretch the lead to 12-2.

In the 8th, the Bulldogs were able to chase UNC starter, Austin Bergner, and two other pitchers out of the pen. After they were able to get out of the back-breaking 8th, UNC wasn’t able to do anything on offense, and MSU cruised to their second victory in the College World Series.

UNC scored 8 runs in their first game with Oregon State, and MSU scored just 1 against Washington. It was clear from the beginning that State was ready to put their offensive woes from Saturday behind them and jump out to an early lead. When it was all said and done, Westburg was clearly the offensive MVP for State with 7 RBIs on the day.

With strong pitching performances, and bats that are starting to come around, there aren’t any teams in Omaha that want to face this MSU team.

The Bulldogs will now take on the winner of Wednesday’s elimination matchup between UNC & Oregon State on Friday at 2 p.m.

Hub City clubs to set tee off for tornado recovery