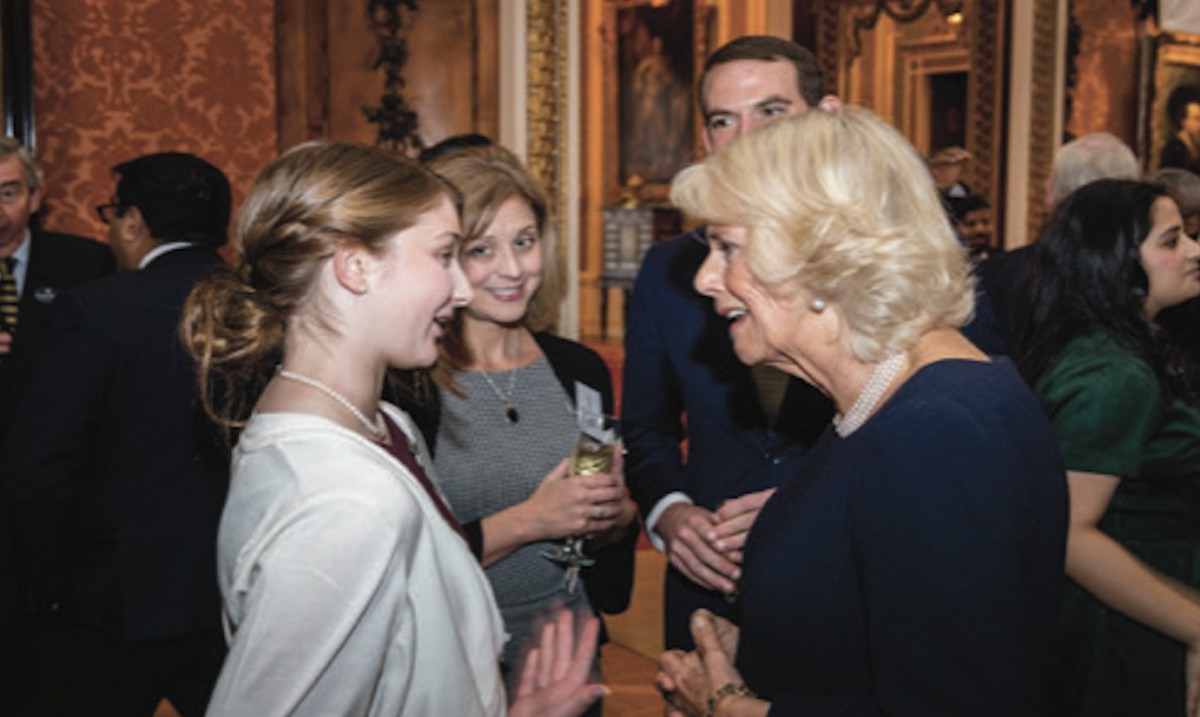 Photo courtesy of the Royal Commonwealth Society of the United States.

Getting to meet royalty, It’s a once in a lifetime meeting and something that 14-year-old Madelyn Sloan Berry recently experienced.

After being named the U.S. winner of the Royal Commonwealth Essay competition, Madelyn, who prefers to go by Sloan, went to London England where she had an audience with Camilla, the Duchess of Cornwall.

“Getting to meet her I was kind of star-struck, because what girl from Mississippi meets royalty? It was just this incredible experience,” Sloan said. “Everyone was really kind. I met a lot of people that day, but Camilla was the one that I will probably remember forever.”

However, the 8th grader said she didn’t enter the competition thinking she was going to win.

“I just entered it thinking ‘why not?’ just in case I could win,” Sloan said. “I wrote the essay, submitted it and then forgot about it.”

With anywhere from 30,000-50,000 applicants from around the world each year, only one student is chosen to represent each country.

Sloan attends Northwest Rankin Middle School. Her parents are Chris and Jennifer Berry, and she has an older brother, Carter. She has always lived in MS. She goes to Pinelake Church. This year, she is in the eighth grade and is on the middle school volleyball team (right side hitter) and the junior varsity tennis team. She also plays the flute in the school’s band and is currently first chair.

Outside of school, Sloan plays the violin and is a member of the Academic Team, the 23 and Up Club, and serves as the vice president of the Jr. Beta Club.

Sloan Berry was the United States’ winner of The Queen’s Commonwealth Essay Competition this year. Sloan and her mother, Jennifer Berry, traveled to London last week and met HRH The Duchess of Cornwall. We were so proud to have Sloan represent the United States at this event. pic.twitter.com/Fb4AOrEn9l

“This is something that in a post-Brexit world, is the commonwealth’s way of a soft approach to foreign diplomacy,” said John Boykin, International Affairs Advisor to Governor Phil Bryant. “The British are very formal and see this not as a governing entity, but it is their soft approach to foreign diplomacy and it looks to organizations like this to establish cultural connections and a lot of it is for trade purposes.”

The Royal Commonwealth Essay Competition is the largest and oldest competition in the world with the organization itself celebrating its 150th anniversary in October of 2018.  In 2015, the contest was renamed ‘The Queen’s Commonwealth Essay Competition’, in honor of HM Queen Elizabeth II’s role as both Head of the Commonwealth and Patron of The Royal Commonwealth Society. Building on the 2018 theme of Towards a Common Future, this past year’s topics focused on sustainability, safety, prosperity, and fairness. They asked writers to address global challenges and work to create a better future for all citizens.

“The Royal Commonwealth Essay Competition helped to open my eyes and pay more attention to what is happening on a global scale,” Sloan said. “It showed me that I have the opportunity to make a change. I hope and believe that I will somehow make a change for the better. Then I stepped off of the plane, once again I was home. It seems small in comparison, but I know better. I now understand that our problems here may look insignificant, but a simple decision can help shape the world that we are living in today and make a better tomorrow.”

One worker retrieved from Green Brothers Gravel Pit, crews working to recover the other

Another Chapter in the Senate Race Saga: McDaniel to Make Major Announcement