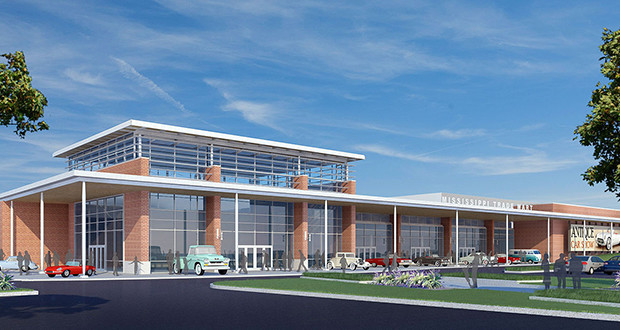 JACKSON- The Mississippi Trade Mart, built in 1962, 42 years ago, has served the people of Mississippi with all of their agriculture needs as a large exhibit hall.

Over the years the venue has hosted shows, banquets, conventions, and special events. Currently the Trade Mart provides 66,600 square feet of column-free exhibit space. The West Bay has 23,940 feet is divided into 11 meeting rooms, and the Convention hall is 43,200 square feet that can be divided into two separate meeting halls.

These rooms are most commonly used for meetings, seminars, and discussion rooms.

The current structure has served a great purpose for Mississippians, but Commissioner of Agriculture Cindy Hyde-Smith says, it’s time to start fresh. That’s why the state is building a brand new facility and knocking down the old one.

“We will have a brand new Trade Mart coming in. The one we have now is 42 years old and the structure is not nearly as good as the structure of the Coliseum,” said Hyde-Smith.”We aren’t going to knock it down until the new one is up and running so we don’t have to cancel any events.”

Hyde-Smith said the Mississippi Fair Commission is still waiting for $30 million in bonds to clear before construction can begin on the new facility.

For events like Mistletoe Marketplace, which is the Trade Mart’s largest event of the year, they will soon be able to operate completely inside. In previous years they were forced to rent tents to house their vendors but the new space will be around 100,000 square feet of usable space.

“We’ve literally had ant beds in the walls, we’ve had air conditioning problems for years over there so when it came to totally renovating or building a new one it was really and easy decision,” said Hyde-Smith.

95,000 square feet of the new facility will be completely open. There will also be availability to the coliseum.

“You will be able to walk, under cover, to the coliseum. It will be part of our floor space,” said Hyde-Smith.

New additions will include a service corridor for those bringing food and beverages for events. Also included in the building plan is a state of the art kitchen that will service the Trade Mart and Coliseum. They’re getting technology upgrades as well with WiFi and internet options that were once not accessible.

Bill in D.C. would stop public money from funding abortion

William Carey classes to continue, despite the storm