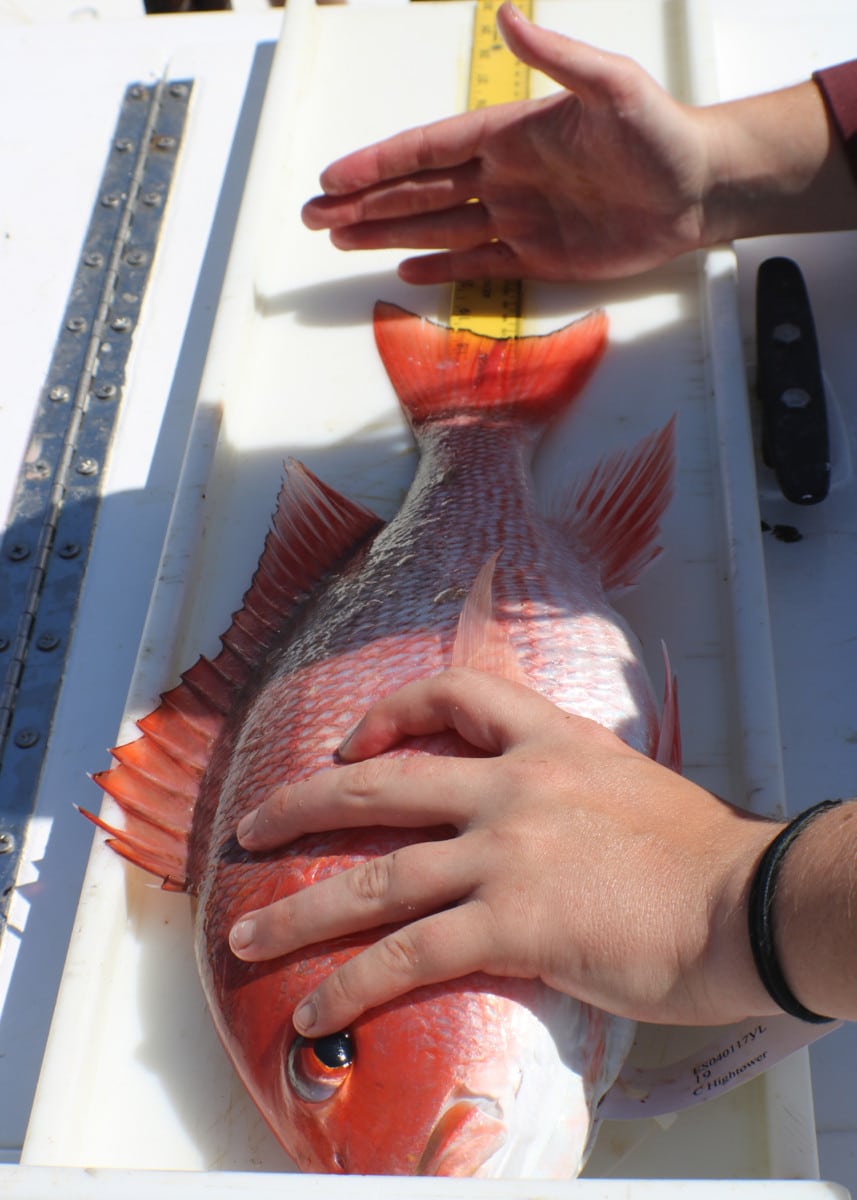 As part of the Great Red Snapper Count team in the Gulf of Mexico, a scientist measures a red snapper caught during a scientific research study. (Photo by Dauphin Island Sea Lab/University of South Alabama Fisheries Ecology Lab)

Scientists at two Mississippi Universities are working to estimate the abundance of red snapper, which is the most sought-after fish in the U.S. controlled waters in the Gulf of Mexico.

A report from the MSU Extension Service says that red snapper are important for economic and cultural reasons. However, fishing trends over the past 150 years have greatly reduced populations, and the stock is currently under a rebuilding plan. While the population is showing signs of recovery with increasing numbers and larger red snapper, scientists say the stock has not yet been rebuilt because it does not contain enough reproductively active females.

To help with this, Congress made funding available in 2016 to estimate independently the red snapper population size in the Gulf of Mexico. The Mississippi-Alabama Sea Grant awarded a total of $10 million for a two-year project (2017–2019) known as the Great Red Snapper Count.

“The goal of this project is to estimate the total number of red snapper in the Gulf,” said MSU Extension Coastal Research Associate Amanda Jefferson. “Biologists will conduct this evaluation separately from the assessment process used by federal managers with the National Oceanic and Atmospheric Administration Fisheries. They will use several research methods, including habitat classification, direct visual counts, depletion surveys and a high-reward tagging study.”

Upon completion of the project, Jefferson said legislators and fishery managers will review the abundance estimate and use it to make more informed management decisions.

“In this way, the Great Red Snapper Count will provide new insight into the Gulf of Mexico red snapper population, while also helping to calibrate the current stock assessment and provide maximum fishery access for all sectors,” Jefferson said.

Thunder and Lightning Podcast: Is there extra pressure on Mississippi State players?