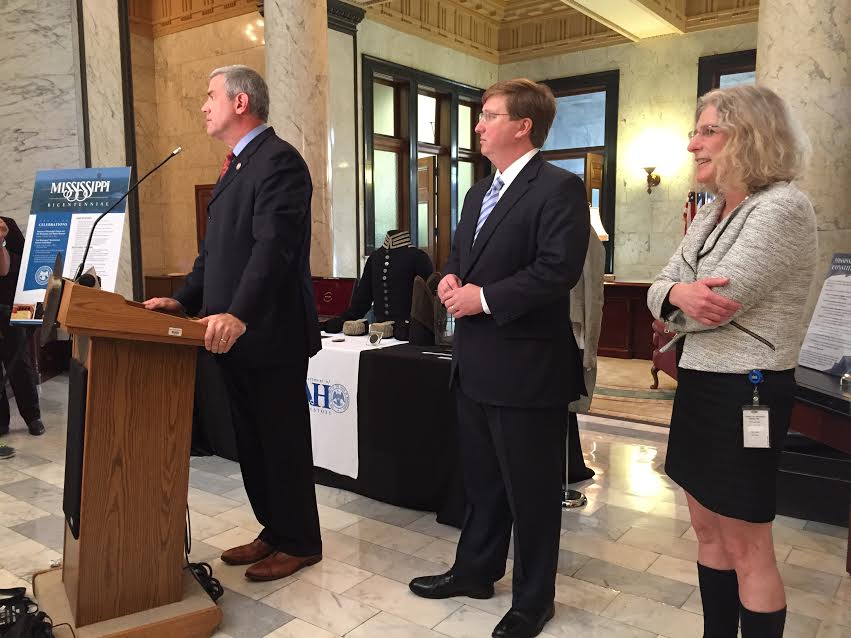 The official birthday of the Magnolia State is on December 10, 2017. That day marks 200 years of Mississippi’s statehood.

Speaker Gunn used the opportunity to remind other lawmakers of the task at hand.

“Our forefathers founded this state 200 years ago and have over the years, from one generation to the next, have passed that responsibility off to us,” said Speaker Gunn.”Now we are charged with the responsibility of continuing that tradition.”

Lt. Gov. Tate Reeves said it is a great time to learn more about the state in which we live, and added that he is the 35th Lt. Governor for the state. The office was originally established in the 1817 constitution. In the 1832 constitution the office was abolished and then reinstated 1886.

“I believe our state is home to great sports giants, literary legends, and never before achieved scientific breakthroughs. I believe strongly in many instances wee need to stop apologizing for Mississippi and start bragging about our many great accomplishments,” said Reeves.

After the celebration Lt. Gov. Reeves was asked if he would support furthered legislation to change the Mississippi state flag, a controversial topic that was raised just last year during the 2016 legislative session.

He said he stands by his continued position that the people of Mississippi should have the right to vote for a change in the state flag.

“I am against any unilateral action by the Governor, by the legislature to change the current state flag,” said Reeves. “If the people of Mississippi want to make a change, and at some point they might, then it is imperative that the people have the change to vote to change the state flag.”

Following Speaker Gunn and Lt. Gov. Reeves, Katie Blount, Director of the Mississippi Department of Archives and History spoke of the upcoming museums set to open in Jackson before the end of the year, Mississippi Civil Rights Museum, and Museum of Mississippi History.

The museums are apart of a project called 2 Mississippi Museums, in which the state will be able to tell it’s own story of the rich and complex history it holds.

Mississippi Bicentennial Celebration Commission, established by the state legislature in 2008. Also involved are the Mississippi Department of Archives and History, Visit Mississippi, and other local and state agencies.