The Mississippi Justice Institute(MJI) has filed a formal complaint with the Mississippi Ethics Commission after the Department of Revenue (DOR) refused to make public the agreement between their agency and Amazon.

The public statement given by the DOR reveals that Amazon can collect a tax from online purchases from Mississippians and give those to the DOR. The negotiations have been public between the agency and Amazon.

“The Department of Revenue has entered into a voluntary agreement with an out of state company,” said Director of MJI Mike Hurst.”This company has no requirement to file taxes with the state of Mississippi and all we are asking for is to see the agreement.”

But there is push back from the DOR on that agreement.

“It makes me think, it makes a lot of people around the state think, ‘what do they have to hide?’ If it’s just a voluntary agreement with an out of state company than just disclose it, let Mississippi people see it and let the chips fall where they may,” said Hurst. 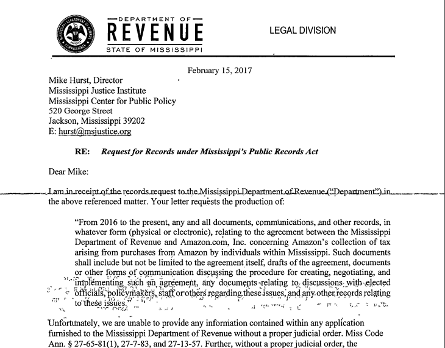 “Under existing U.S. Supreme Court precedent, the Department of Revenue cannot require an out-of-state company with no physical presence in Mississippi to pay a use tax. There is no exemption to Mississippi’s transparency laws which allows the DOR to deny review of these public records, so we have appealed their refusal to the Ethics Commission,” said Hurst.

News To Go for Presidents Day

If you want to start your own business, read this.