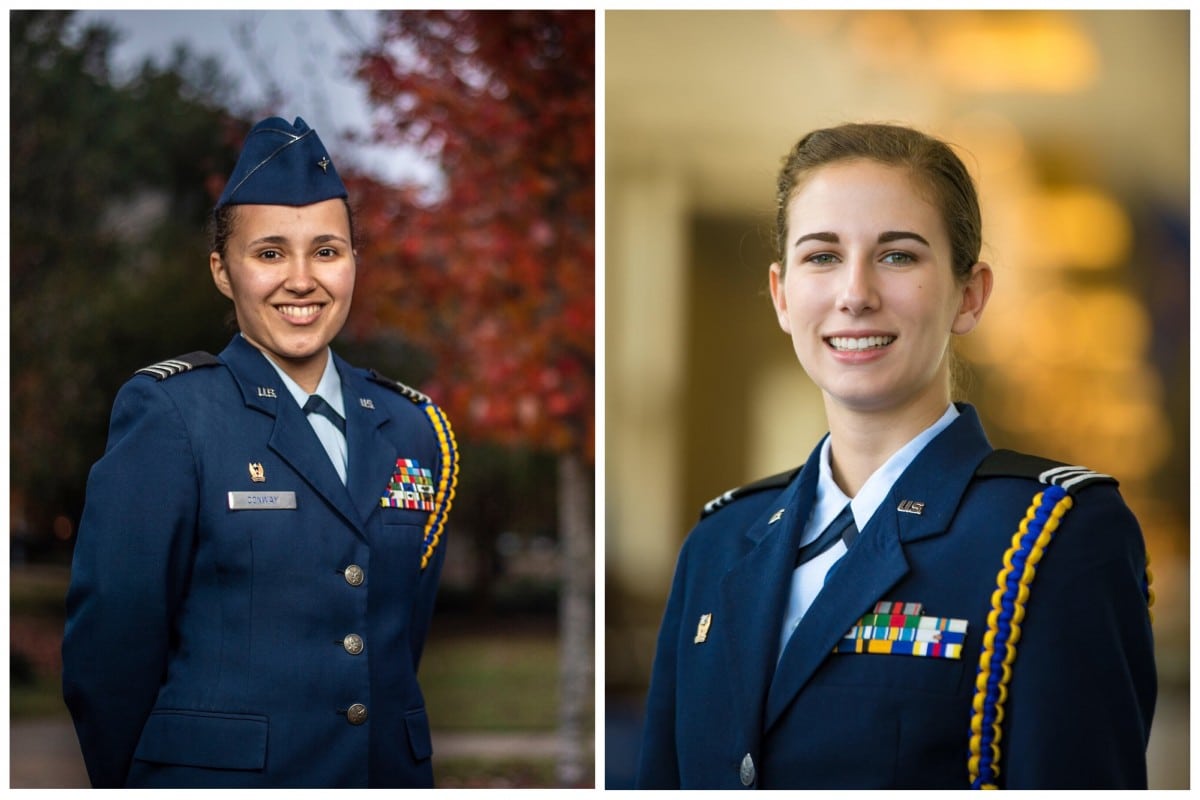 Senior mathematics major AFROTC Cadet Courtney Conway is the only cadet in the nation receiving the 2018 Armed Forces Communications and Electronics Association’s Maj. Gen. Robert Sadler, USAF, Honor Award. The award is given to top graduating cadets in electrical engineering or communications sciences in memory of Sadler, former senior director of corporate and chapter operations for AFCEA International. AFCEA awards recognize ROTC graduates in each service who demonstrate excellence in military and academic performance. Conway, an Oxford native, plans to graduate next month from MSU.

Additionally, Conway and fellow AFROTC Cadet Sarah Doll, a senior criminology major from Charleston, South Carolina, have both been selected for the Air Force Office of Special Investigations.

The federal law enforcement agency investigates federal level crimes within the Air Force, and identifies and neutralizes criminal, terrorist or espionage threats against the military division. After completing AFOSI training, Conway and Doll will join the group as career Air Force officers. They are among 22 ROTC cadets in the nation chosen from a pool of applicants from 145 AFROTC units.

“Cadet Conway’s zeal in attacking leadership challenges and commitment to excellence is a clear display of the traits the Air Force is looking for in our officer candidates,” said Cassidy.

Conway credits Cassidy for being the “driving force” behind her AFCEA win, noting he submitted her application because of her performance in school and in AFROTC.

“It is an honor and privilege to receive the AFCEA award,” Conway said. “To say the least, it is a testament to the high expectations that our Air Force ROTC cadre set and the mentorship we receive in preparation for Air Force active duty.”

Conway said MSU’s Department of Mathematics and Statistics “deserves credit for the wonderful professors and instructors who have taught and mentored” her and pushed her “to strive for the best academically.” Her AFCEA selection brings MSU back-to-back national recognition following last year’s win by MSU cadet Trevor H. Williams of Bryant, Alabama. The award includes an iconic Chelsea Clock.

“To be interviewed by current AFOSI agents and ultimately selected by these agents is an impressive accomplishment and honor,” Cassidy said. “To have two cadet students at MSU out of the 22 selected nationally for the AFOSI career field is a fantastic accolade for our institution.”

Doll said she is excited to make her desire to investigate crimes a reality.

“Wanting to be an AFOSI agent ties together my desire to serve my country with my interest in studying crime,” Doll said.

She said having multiple leadership roles within Alpha Delta Pi sorority and MSU Spectrum, while maintaining her grades and holding an on-campus job, made her a good candidate for AFOSI.  She also credits her Paris study abroad experience, an immersion in the French language, as a help in garnering the AFOSI selection.

“I also had the chance last year to help lead an organization, Arnold Air Society, on a national level with Courtney, which opened up a lot of opportunities and connections for us both,” Doll said.

Conway said she has always wanted to serve her country through military service and desired a career in law enforcement. She shadowed AFOSI agents to understand what the career path entailed.

“After spending time with AFOSI, I knew without hesitation that this was the perfect career for me,” Conway said.